California election officials received reports during the weekend about the boxes in Fresno, Los Angeles and Orange counties.

On Sunday, the secretary of state issued a memo telling county registrars the boxes were illegal and that ballots must be mailed or brought to official voting locations.

State GOP spokesman Hector Barajas said that the party owns the boxes. He declined to comment on how many exist and where they are located.

“Democrats only seem to object to ballot harvesting when someone else does it,” Barajas said.

Irregularities and mistakes are surfacing around the country as more voters than ever seek to vote by mail and demand for mail-in ballots has skyrocketed.

There have been growing reports of mailing errors by election authorities and contractors hired by local election boards to print ballots, stuff envelopes and mail them to voters.

With about 240,000 ballots mailed, that meant one in five voters received an incorrect ballot. The error happened on October 3 when someone changed a setting on a machine that places absentee ballots into mailing envelopes, officials said.

Some ballots had an incorrect congressional race, while others had the correct information but were sent to voters in a different precinct.

Printing and mailing of the replacement ballots were under way, the Franklin County Elections Board announced.

Franklin County encompasses the city of Columbus and the surrounding area with about 1.3 million residents.

It played a crucial role in swinging the 2000 and 2004 presidential elections to George W Bush.

In New York City, mail-in voting got off to a rocky start in September when a vendor sent out nearly 100,000 absentee ballots with the wrong names and addresses printed on the return envelopes.

The deluge of faulty ballots, sent to voters across Brooklyn, could result in ballots being voided if voters sign their own name on return envelopes bearing different names.

New York City Board of Elections Director Michael Ryan said all voters who got the bad ballots would receive new ones. 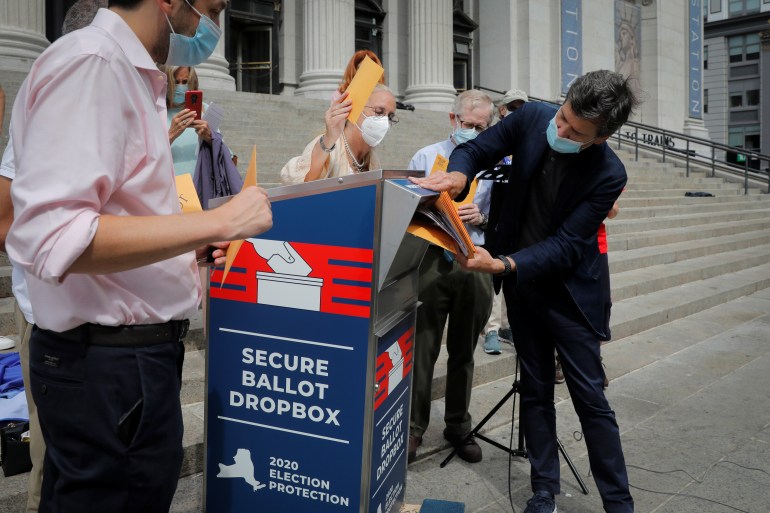 It’s not clear how many of the ballots were actually sent to voters before the error was discovered and corrected, according to Tracy Wimmer, spokeswoman for Secretary of State Jocelyn Benson, told the newspaper on September 15.

In Virginia, there have been three instances of printers sending about 1,400 duplicate ballots out to voters in Richmond, the state capital, and in Fairfax County, the state’s most populous. Election officials have said voters will not be able to cast two ballots.

About 2,100 general election ballots that were misprinted without the US presidential race were mailed to Los Angeles County voters, the Los Angeles Times reported.

“While this has impacted a very small number of Los Angeles County voters … we nevertheless apologise to those affected by the mistake,” said Michael Sanchez, a spokesman for the office.

Ballots for the November 3 election are being mailed to all registered voters in California, including about 5.6 million in LA County.

Meanwhile, the controversy in California over unauthorised drop boxes surfaced after a regional field director for the state’s GOP in Orange County posted in a social media photo with one of the unofficial boxes and wearing a face-covering supporting the congressional campaign of Michelle Steel, a county supervisor who is challenging Democratic Representative Harley Rouda for his seat.

There were also reports about similar boxes at a church in the Los Angeles County community of Castaic and at various locations in Fresno County.

He said it was not clear how many voters had used unofficial boxes but after receiving reports about them, he notified the state and district attorney’s office.

“Sadly, this is par for the course from the Republican Party – well-versed in making it harder, not easier for Californians to vote,” he said in a statement.