Gabon knows its oil won’t last forever, so officials are turning to the Central African nation’s rainforest for revenue — while also promising to preserve it.

A plywood factory that aims to create jobs from the harvesting of Gabon’s timber. Credit…

Dionne Searcey and Arlette Bashizi traveled to Libreville and Loango National Park in Gabon to learn more about the government’s conservation efforts.

LOANGO NATIONAL PARK, Gabon — Evening and the rainforest. A riverbank packed with elephants. Treetops so dense they obscure all but a chimpanzee’s hairy arm. And, as the sun sets, a twinkle on the horizon: an offshore oil platform.

The nation of Gabon is so lush with forests and wildlife its nickname is Africa’s Eden. It’s also one of the continent’s major oil producers.

Gabon for decades has relied on petroleum to drive its economy. But officials know their oil won’t last forever. So they’ve turned to Gabon’s other abundant resource — a huge Congo Basin rainforest, full of valuable trees — to help make up the difference once the oil is gone.

Gabon is engaging in activities that have become dirty words in the world of climate activism: It allows palm-oil plantations in certain areas and is turning rainforest into plywood. However, unlike Brazil and other countries that have stood by as rainforests are decimated, Gabon has adopted strict rules designed to keep the vast majority of its trees standing. Its aim is to strike an important balance between the needs of a single nation and those of a world facing a climate crisis.

Gabon has banned raw timber exports (France was a major buyer) and created an industrial complex with tax breaks to attract furniture companies, plywood makers and others to build factories and create jobs. Rules limit logging to just two trees per hectare every 25 years. And, to fight illegal logging, a new program tracks logs with bar codes.

Gabon’s approach appears to be working, and other countries are already copying aspects of its plan, making it a potential blueprint for rainforest protection. Several Congo Basin nations have made commitments to ban raw timber exports next year, and two countries are planning industrial complexes aimed at creating jobs by transforming wood locally.

“Gabon on its own doesn’t solve these problems,” said Lee White, Gabon’s Minister of Water, Forests, the Sea and Environment. “But if we don’t have examples of countries where we are solving the problems, then who is anyone else going to learn from?”

Gabon’s forests remain among the most carbon-absorbing in the world. Yet the Congo Basin rainforest — second in size only to the Amazon — faces grave risks. Research shows that the Democratic Republic of Congo (the country with the biggest swath of the rainforest) has been losing more old-growth rainforest than any country except Brazil. 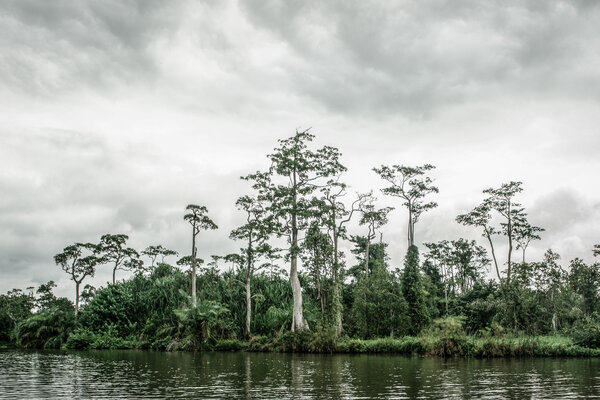 And this year Congo shocked environmentalists with plans to auction off gas and oil blocks, some of which overlap carbon dioxide-absorbing tropical peatlands, as well as parts of Virunga National Park, a famous gorilla haven.

Congolese officials have pointed to Gabon as an example of how drilling can occur without destroying rainforest. Congo’s President Félix Tshisekedi said in an interview that the revenue will be a way for his country to “have better control of its destiny.”

Shift to clean energy. The energy crisis sparked by Russia’s invasion of Ukraine is likely to speed up rather than slow down the global transition away from fossil fuels and toward cleaner technologies like wind, solar and electric vehicles, the International Energy Agency said in its annual World Energy Outlook, a 524-page report that forecasts global energy trends to 2050.

Climate pledges fall short. Countries are failing to live up to their commitments to fight climate change, pointing Earth toward a future marked by more intense fires, drought and other havoc, according to a new U.N. report. Just 26 of 193 nations that agreed last year to step up their climate actions have followed through with more ambitious plans.

Protest tactics spark debate. Desperate to end complacency about the climate crisis, some climate activists are resorting to high profile tactics, like throwing food at priceless artwork in museums. The actions have gone viral and set off an international storm of outrage and debate.

Shifting patterns. The melting of the snowpack in the high Cascades has long been a source of sustenance in the Pacific Northwest. But as climate change makes seasons less predictable and precipitation more variable, people there are reimagining the region’s future and the tools that will be needed to manage it.

Facing drought. The story of the Netherlands’ long struggles against excess water is written all over its boggy landscape. Now that climate change is drying it out, the Dutch are hoping to engineer once again their way to safety — only this time, by figuring out how to hold onto water instead of flushing it out.

Mr. Tshisekedi pointed out that drilling takes place in U.S. national parks. “I want to be very clear: There is no treaty or international accord that prevents the Democratic Republic of Congo from going after its natural resources.”

The issue has come to the forefront as Russia’s invasion of Ukraine caused the European Union to vow to stop buying gas from Russia and instead look to Africa and elsewhere.

Some of Gabon’s goals are short on details and viewed as too ambitious for a country that lacks reliable roads even in some populated areas. And critics say the details of Gabon’s plans for carbon credits could wind up calling into question a market that already suffers from doubts about its integrity.

In many ways, Gabon is an ideal laboratory for conservation. It has a small but growing population of barely more than 2 million people in a nation the size of Colorado. And forest covers nearly 90 percent of its land.