Beijing has condemned the increased presence of US forces in Chinese-controlled regions and insisted the number of US ships deployed has increased by 20 percent and planes by 40 percent, since January. The US military regularly conducts authorised patrols of the disputed South China Sea, East China Sea and Taiwan Strait. 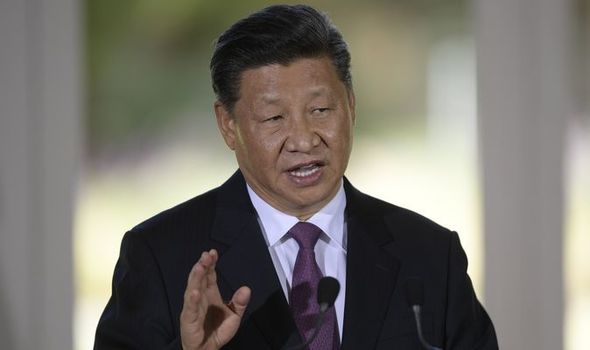 Chinese defence ministry spokesman, Wu Qian, has told the US to “strictly restrain its frontline forces” and insisted the presence its military personnel is “threatening regional peace and stability”.

He said: “The US frequently dispatches ships and planes to operate in seas and airspace near China, promoting regional militarisation and threatening regional peace and stability.”

Mr Wu added: “We urge the US side to strictly restrain its frontline forces, abide by regulations including the Rules of Behaviour for Safety of Air and Maritime Encounters and International Regulations for Preventing Collisions at Sea, and prevent similar dangerous incidents from happening again.”

Speaking at a press conference, Mr Wu cited a recent incident involving the USS Mustin Navy destroyer and says it conducted an observation of a training exercise being conducted by a Chinese Laioning aircraft carrier.

Mr Wu said the US vessel “seriously interfered with the Chinese side’s training activities and seriously threatened the safety of navigation and personnel on both sides”.

Tensions between the two nations also stem from Washington’s growling alliance with Taiwan – an island China regard as a wayward province.

The US has a lucrative weapons deal with Taiwan and is legally bound to protect the territory from attack.

The US President has wasted no time in his first 100 days in office and put forward a request for a £513billion ($715bn) defence budget, which the Biden-administration has said will primarily be used to meet the challenge of China.

He added: “And all these seem to be preparing for their final military assault against Taiwan.

“This is our country, this is our people and this is our way of life. We will defend ourselves to the very end.”

Mr Biden addressed the growing influence of China during his first speech to Congress on Wednesday.

He said: “China and other countries are closing in fast.

“We have to develop and dominate the products and technologies of the future.”

Mr Biden added he told Chinese President Xi Jinping that the US will maintain a strong military presence in the Indo-Pacific “just as we do for NATO in Europe, not to start conflict, but to prevent one”.
Source: Read Full Article