The London-based FTSE 100 stock market plunged 3.5 percent lower by mid-morning – it’s lowest level since December – while the NASDAQ-100 fell by two percent as coronavirus panic swept through the world. Italy’s MIB index was down more than four percent, while declines in global financial powerhouses France and Germany were sharper than normal in European trading. South Korea’s KOSPI stock market closed down 3.9 percent following news of seven deaths in the country and 700 confirmed cases of COVID-19.

The pan-European Stoxx 600 benchmark also lost 3.5 percent of its value.

Fear is sweeping through global stock markets, with economists downgrading growth forecasts for China and the wider global economy.

Oxford Economics has warned world financial output could flatline during the first half of this year if the coronavirus outbreak is declared a global crisis by the World Health Organisation (WHO).

Rabobank analysts warned in a note Monday: “Regular readers will know that our four projected COVID-19 scenarios were ‘bad, worse, ugly, and unthinkable’. 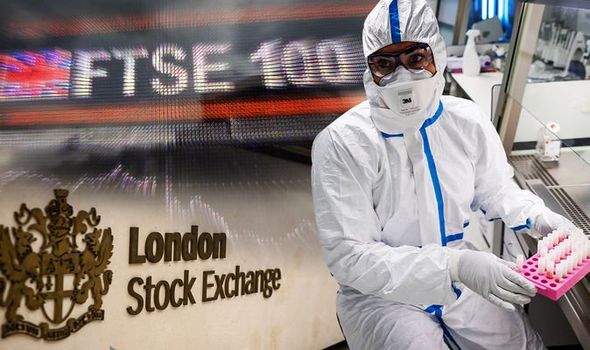 “Current news today suggests risks that the base case is rapidly shifting from ‘bad,’ meaning only China is impacted, to ‘ugly,’ where both emerging Asia and developed economies see soaring infection rates and deaths.”

David Madden, analyst at CMC Markets, said: “The fear is that we could be looking at a scenario where the virus spreads aggressively in this part of the world too, so traders have the perfect excuse to take profits and get out of stocks because it wasn’t that long ago that they were at fairly lofty levels.”

AMP chief economist Shane Oliver said: “There is lots of bad news on the coronavirus front with the total number of new cases still rising.

“Of course, there is much uncertainty about the case data, new cases outside China still looks to be trending up and the economic flow on has further to go with the Chinese economy likely to have contracted in the March quarter.”

Travel-related stocks have taken the brunt of the impact, with easyJet losing more than 12 percent and holiday operator TUI down 8.5 percent at one stage on Monday morning.

Brent crude oil was trading at almost four percent lower at just over %56 a barrel.

Gold, which is seen as a safe haven for investors in times of financial turmoil, surged to its highest level in seven years at $1,6883 an ounce.

The death toll in China has surged past 2,500 and although reported death rates are falling, restrictions on businesses and the movement of people remain in place.

Associated British Foods told its shareholders the company had stockpiled products to plant for the extended Chinese Lunar New Year holiday, adding it was “well stocked” for the coming months.

But the company warned it is “assessing mitigating strategies” is case the financial disruption is long-term.

The death toll in China has surged past 2,500 and although reported death rates are falling, restrictions on businesses and the movement of people remain in place.

These have been present for over a month, and have left the world’s second largest economy fighting to turn its fortunes around.

Coronavirus panic has also quickly spread across Europe, with a fifth person dying in Italy and Austria assembling a taskforce to discuss whether to introduce border controls with the neighbouring country.

More than 200 people have been infected with COVID-19, with five deaths in the space of 48 hours.

The latest victim was an 88-year-old man from the Lombardy region, making him the fourth victim in the area.

On Sunday evening, Austria refused entry to a train travelling from Italy because there were two people with fever symptoms on board.

Austrian train operator OBB told Sky News all train traffic to and from Italy had been suspended, but that suspension was lifted a few hours later.

French director of health Jerome Salomon said the situation was “worrying” and warned of further cases in the country because of its proximity to Italy.

But he added there are no plans for border controls, while Germany also said it is not yet considering introducing similar measures.