HONG KONG (Reuters) – Pro-democracy protesters have all but vanished from the streets of Hong Kong over the past month as residents avoid the new coronavirus, but the outbreak has broadened discontent with the city’s leadership and China’s influence on the financial hub. 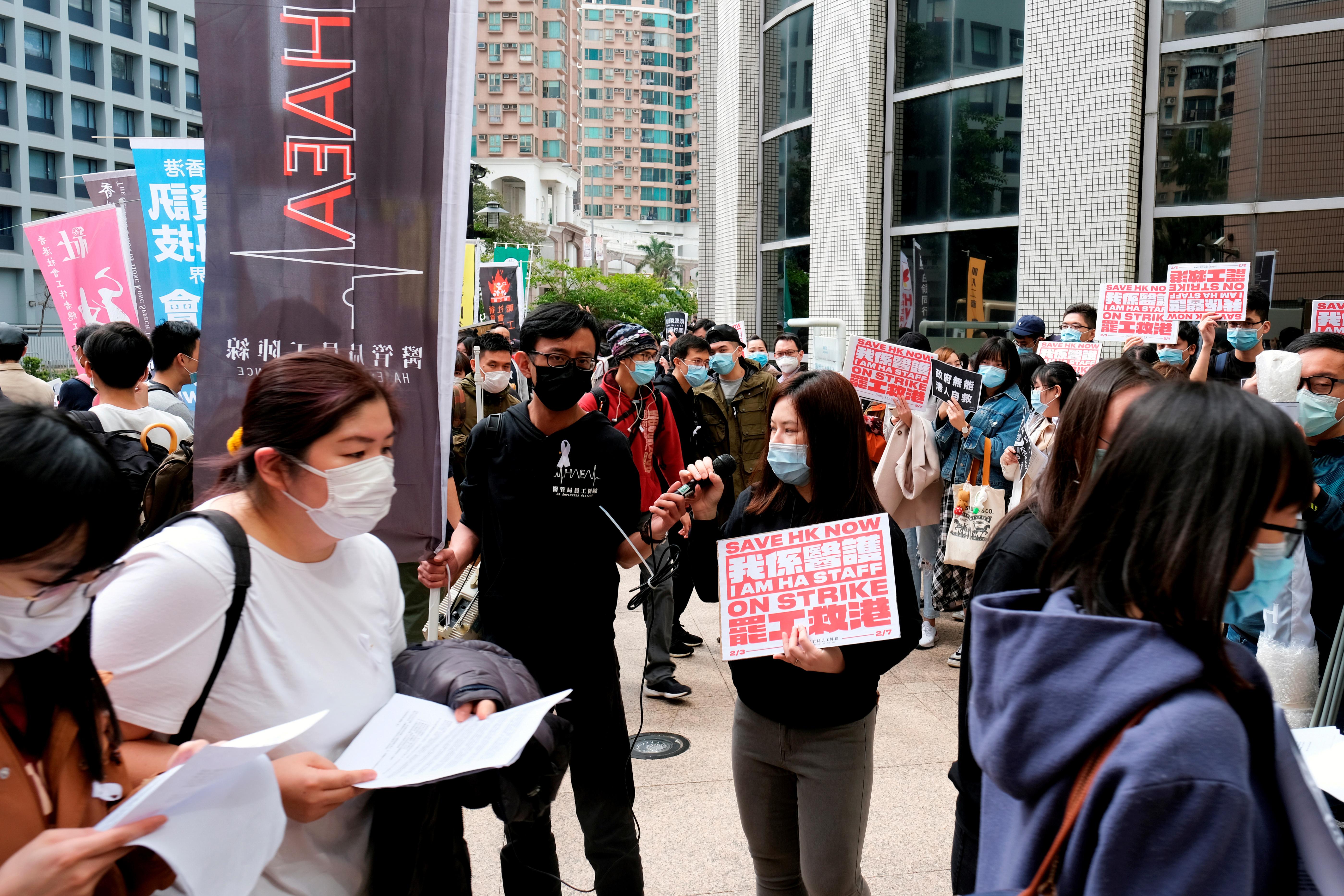 Some business leaders and pro-Beijing politicians have joined pro-democracy and union figures in attacking Carrie Lam’s administration for what they see as an uncoordinated response to the virus and its refusal to seal the border with mainland China, which might have prevented infections.

“Regardless of political opinions, people in Hong Kong have already lost confidence in the government of Carrie Lam,” said Mike Lam, chief executive of the AbouThai department store chain.

Lam’s stores have experienced some of the chaos caused by the virus, recently receiving almost 100,000 applications for only 3,400 boxes of surgical masks in stock, said Lam.

Hong Kong’s 7.5 million residents have largely ignored the government’s attempts to calm the situation, panic-buying food staples and toilet paper in supermarkets and forming long queues for masks and hand sanitizer in the rare places they can be found.

That has led to widespread anger and will fuel renewed protests this summer, activists say.

“Now, it is not really about politics, it’s about your genuine life,” said Clement Chung, chairman of the Hong Kong Pharmaceutical and Medical Device Industries Employees General Union, which has recruited 320 members since it formed on Dec. 31.

“It connects all the people in Hong Kong in terms of anti-government sentiment. The disappointment and the anger, they want something to change,” he said.

‘CLOSE THE BORDER, SAVE HONG KONG’

Lam’s refusal to completely shut the border with mainland China – largely seen as a move to appease Beijing – has inflamed many in Hong Kong.

Four current and former leaders of the territory’s Liberal Party, which is generally in favor of business, the government and China, criticized Lam on the issue.

“As the new coronavirus wreaks havoc on the mainland, the only right decision you should make is to immediately close the border,” they wrote to Lam this month, calling her response hesitant and ineffective.

Three-quarters of the city’s residents agree, according to a survey by the Hong Kong Public Opinion Research Institute released earlier this month. The same proportion of 156 U.S. business leaders polled by the American Chamber of Commerce in Hong Kong also said they want the border closed.

In the first week of February, 8,000 doctors, nurses and medical workers in the newly formed Hospital Authority Employees Alliance (HAEA) took part in a five-day strike, chanting: “Close the border, save Hong Kong.”

Hours after the strike began, Lam announced the closure of four more border crossings to mainland China, but stopped short of a total shutdown. Now 10 of 13 checkpoints are closed.

That may not be enough to stop frustration spilling over this summer.

“The anger that is building up will fuel future protests against the government and for democracy,” said Lee Cheuk-yan, a labor activist and former pro-democracy politician.

Lee said the next marches will likely start around July 1, the 23rd anniversary of Britain handing back control of Hong Kong to China, or earlier if the virus subsides.

Hong Kong was roiled by often violent protests throughout the second half of last year, following an attempt by the government to introduce a bill that would have allowed criminal suspects to be extradited to mainland China for trial in Communist Party-controlled courts.

The bill was withdrawn but the protests escalated into a broader call for greater democratic rights in the city and an inquiry into alleged police brutality in dealing with the protests.

The virus, first detected in the Chinese city of Wuhan, has infected 75,465 people and killed 2,236 in mainland China, according to the country’s National Health Commission. Hong Kong has reported 68 infections and two deaths.

Lam rejected a complete shutdown of the border as discriminatory and impractical. Her administration said its decisions were based on World Health Organization guidelines, and not politically motivated.

“The only consideration of the government in dealing with the infection is public health, and the government’s actions are underpinned by very strong scientific and expert advice,” Lam’s office said in a statement to Reuters.

Lam has also pledged HK$30 billion ($3.85 billion) to measures to counter the spread of the virus and ease the financial impact on businesses.

Not all in Hong Kong are critical. Sunny Ho, executive director of the Hong Kong Shippers’ Council, said he was happy with Lam’s measures and that critics had “grossly underestimated the difficulties that the administration has to consider.”

That understanding is not visible at street level, where many remember the Severe Acute Respiratory Syndrome (SARS) outbreak of 2003 that also started in mainland China and killed nearly 300 people in Hong Kong.

Some reactions have crossed into hostility toward residents and visitors from the mainland.

A list circulating on social media shows 34 restaurants that refuse to serve customers from areas they deem to be high risk for coronavirus. Posters outside some restaurants entrances ban mainlanders, citing health concerns.

Edgy Salon said on Facebook it would only cut “Hong Kongers’ hair,” while Kwong Wing Catering posted: “You won’t seal the border, so I’m sealing my shop.”

One popular post on a pro-democracy Facebook page bragged of misleading mainland Chinese tourists into buying sexual lubricant instead of scarce hand sanitizer.

Hundreds rallied in at least three Hong Kong neighborhoods last weekend to protest against plans to turn some government-owned public housing into coronavirus quarantine centers, angry about lack of consultation with citizens.

In January, a group of protesters set alight the lobby of one of the buildings.

Some of the 40 or so pro-democracy unions formed since late 2019 have led a more organized approach to the outbreak, and plan to use that momentum to put more pressure on the city’s government. 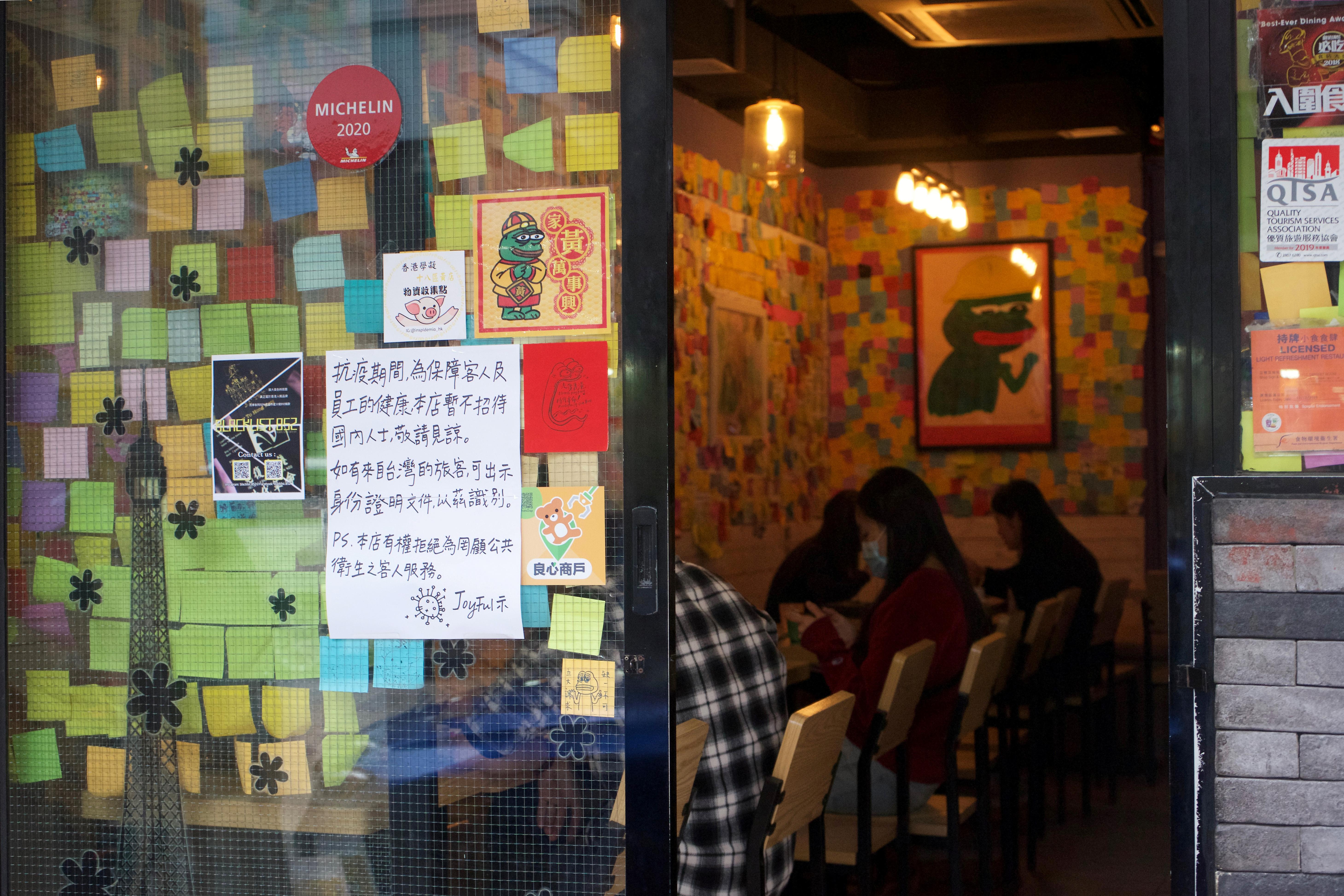 Chung said he hopes others unions will “take the relay baton to continue the strike,” although most of the new unions need more members to force change.