US President Donald Trump, 74, was recently accused of stoking racial tensions over comments about the campaign group Black Lives Matter. He described members as “thugs” and argued that their name was “discriminatory” and “terrible”. The leader has denied allegations of racism throughout his presidency and rejected the notion that he has made inflammatory remarks. Despite this, a Washington Post-Ipsos poll in January, found that eight out of 10 African-Americans surveyed “believe President Trump is a racist” and has “made racism a bigger problem in the country”. In a secret recording shared with Express.co.uk, President Trump claimed to have friendships with a number of black celebrities – and made remarks that a participant alleged were disingenuous.

The comments, which the White House do not deny, were made during a meeting with the Drum Major Institute – a think tank founded by Martin Luther King Jr and other members from the Civil Rights Movement.

MLK’s son was in attendance along with a number of others from the group who hoped to encourage President Trump to consider a new photo ID card that hoped to avoid voters being unable to cast their ballot.

The meeting was recorded by Tootsie Warhol, a former lawyer turned activist and performer, who criticised the world leader for showcasing sports memorabilia by black athletes in his office and boasting about having “black friends”.

He told Express.co.uk: “It was a point of desperation, the whole meeting it was like he needed to name as many black people as he’d ever met in life, whether they liked him or not and give an illusion that they were friends.”

In the recording, President Trump pointed out “Shaquille’s sneaker”, “Mike Tyson’s belt”, a glove he claimed was given to him by Sugar Ray Leonard, among other items.

He also claimed to “have a very good relationship” with Barack Obama – a comment that many would disagree with and in recent remarks appear not to be true. 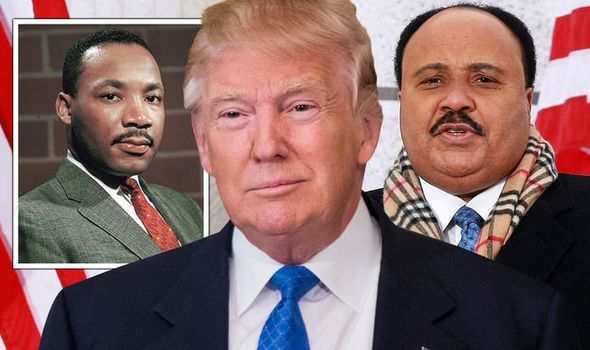 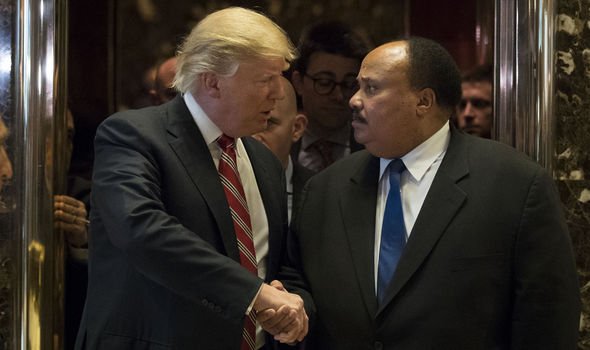 Last month, the former US leader blasted President Trump for showing “no interest in putting the work” and “using the awesome power of his office to help anyone but himself and his friends”.

He added: “No interest in treating the presidency as anything but one more reality show that he can use to get the attention he craves.”

Michelle Obama admitted she would “never forgive” President Trump for “putting her family’s safety at risk”, by fuelling the incorrect ‘birther conspiracy theory’ that her husband was born outside of the US – and thus ineligible to be president – in her 2018 memoir ‘Becoming’.

In the secret recording, President Trump also said: “I listen better to the African-American people than anybody else. Anybody else in this room.”

The statement was made before Martin Luther King III and a number of others from the Drum Major Institute – a group that aims to address racism and racial inequality in the US.

President Trump continued: “I have so many friends, African-Americans, that are so incredible, and everyone knows that. 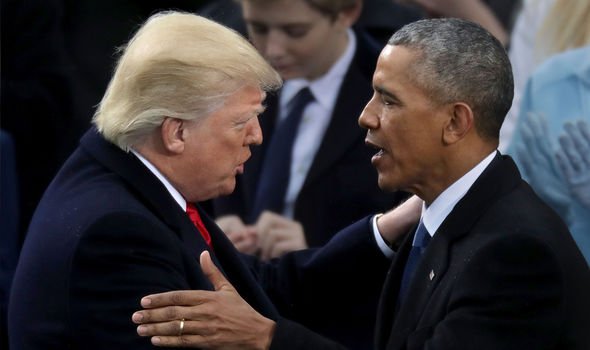 “[Rev Al] Sharpton’s a cunning guy. You know he’s always been a friend of mine. You know in person when I see him he hugs me with Don King. Don King and Al Sharpton.”

The comments were made inside Trump Tower, in New York, on January 16, 2017, four days before the President was inaugurated and two days before the US public holiday Martin Luther King Jr Day.

Mr Warhol – who attended the meeting as he worked with the Drum Major Institute – claimed to have been “surprised and deeply offended” by the leader’s remarks and felt that President Trump acted insensitively during the meeting with Martin Luther King III.

He added that no one in the room felt able to “call out his ridiculous and offensive comments”, in references to his claims about listening to the black community.

Mr Warhol continued: “It was the craziest thing, we walked into the office, we didn’t ask about the merchandise and memorabilia.

“He wasn’t there to discuss foreign relations or Shaquille O’Neal’s sneaker, which is why it was so odd.

“I remember he started bragging about these black athletes – he’s not their friend, he’s using them as trophies and props in a reality TV show that never ended.

“There was ‘The Apprentice’ and now it’s ‘The Apprentice White House’ version, it’s all a photo-op and a TV show and in reality you know he doesn’t have a strong relationship with the black community.” 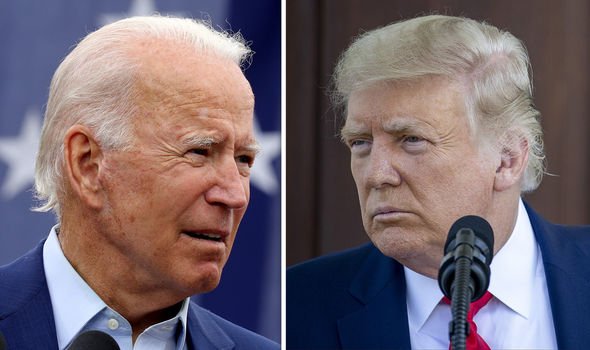 The comments moved Mr Warhol to quit his full-time job as a lawyer in August last year – now he impersonates President Trump and creates art about the US leader.

He said: “I thought this was going to be a serious meeting with the son of Martin Luther King Jr and he would be more toned down.

“I was upset as a white person. I can’t imagine how others, like Martin Luther King III felt… It’s a huge concern and I hope that African-Americans especially are very aware.

“President Trump is a big boy, he said this stuff and now hopefully more people come to the realisation that he’s hurting our democracy and communities across the United States.

“Even though he was funny on ‘The Apprentice’ he should not be President.”

Earlier this year Mr Warhol, who regularly dons orange make-up and a blonde-wig to impersonate the leader, registered as a candidate for president.

He claimed the decision was part of his “anti-Trump activism” and urged people to vote for Joe Biden instead of him.

Mr Warhol said: “In the US everybody agrees that this is the most dramatic year after George Floyd and coronavirus – it’s the election for our lives and I hope our new president is Biden.”

When contacted by Express.co.uk, the White House did not deny the comments made by President Trump but insisted he had worked to benefit black American communities.

They said: “Donald Trump’s record as a private citizen and as president has been one of fighting for inclusion and advocating for the equal treatment of all.

“Anyone who suggests otherwise is only seeking to sow division and ignore the President’s work for underserved communities.”

They added: “The President is grateful for his support among Black Americans, and their many contributions to helping make America great.”

Related posts:
Recent Posts
Latest Posts
Opinion | How Joe Biden Can Unify the Country
Kim Jong-un threat: Satellite images show military base preparing dolphins for WAR
What to Cook This Week
Small Business: Developer launches Workable – Tinder-like app for connecting with contractors
Opinion | ‘The Lessons of Nuremberg Must Be Continually Relearned’
This website uses cookies to improve your user experience and to provide you with advertisements that are relevant to your interests. By continuing to browse the site you are agreeing to our use of cookies.Ok