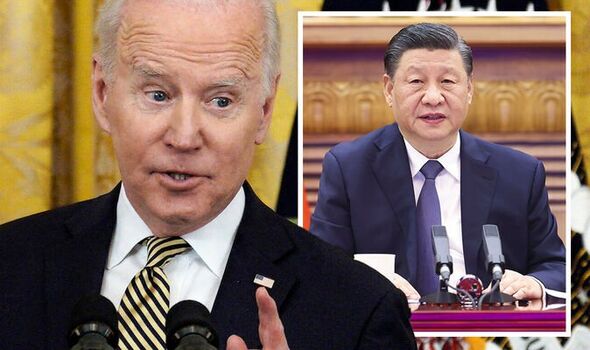 “State-to-state relations cannot go to the stage of military hostilities,” Chinese state broadcaster CCTV reported Xi as saying. “Peace and security are the most valued treasures of the international community.”

“The Ukraine crisis is something that we don’t want to see.”

Xi said China and the United States must guide bilateral relations along the right track, and both sides should also shoulder due international responsibilities and make efforts for world peace.

But the US was also keen to stress that if China began helping Russia, there would be ‘consequences’.

China, an ally of Vladimir Putin, has taken an ambiguous stance on his invasion of Ukraine.

Beijing has declined to condemn the Russian leader – who met the Chinese head of state before the war began – but has stressed it wishes to help broker a lasting peace.

Yesterday, Xi and the US President spoke for nearly two hours, according to White House officials.

It is understood Mr Biden tried to persuade the Chinese leader to further distance himself from Putin, in an attempt to starve Russia’s war machine by isolating Moscow from the one big power that has yet to condemn its assault.

Mr Biden, who this week described Putin as a “murderous dictator”, is also believed to have made it clear to Xi in his call that China “will bear responsibility for any actions it takes to support Russia’s aggression.”

The Kremlin yesterday branded Biden “irritable” and “forgetful” after the US president labelled Putin a “war criminal” and a “murderous dictator” in recent days.

But if China further distances itself from Russia, it would see the country almost totally cut off from the rest of the world.

Putin and Xi signed a “no limits” friendship pact three weeks before the invasion in an ostentatious event held on the morning of last month’s Winter Olympics opening ceremony in Beijing.

The document repeated some of Russia’s grievances over Ukraine.

But China has so far been treading a careful line in public, abstaining in votes over U.N. resolutions condemning Russia, while declining to refer to the assault as an invasion and repeating criticism of the West.

But Washington, which this week announced $800 million in new military aid to Kyiv, now says Moscow wants more from Beijing than just diplomatic cover, and has asked for money and weapons to keep the war going, which Moscow and Beijing deny.

The United States is concerned China is “considering directly assisting Russia with military equipment to use in Ukraine,” Secretary of State Antony Blinken said.

Analysts said the phone call between the two men could prove significant.

Helena Legarda, Lead Analyst at the Mercator Institute for China Studies, said: “Beijing will do everything in its power to avoid having to openly take sides, but its formerly relatively cost-free relationship with Russia has become complicated and is now exposing China to growing geopolitical, economic and reputational risks.

Hours before the phone call, China sailed an aircraft carrier through the sensitive Taiwan Strait – shadowed by a U.S. destroyer.

Meanwhile, direct peace talks between Ukrainian authorities and their Russian counterparts continue in a bid to find common ground sufficient to call a ceasefire.

The two governments are understood to have made some progress, with Ukraine agreeing it can never join Nato and Russia proposing a ‘neutral’ demilitarised Ukraine could be one solution.