The effort could buttress efforts to unwind pro-business regulations of the past four years, while uplifting science staff battered by four years of disregard. It is particularly explicit at the Environmental Protection Agency, where President Biden’s political appointees said they felt that an honest accounting of past problems was necessary to assure career scientists that their findings would no longer be buried or manipulated.

In a blunt memo this month, one senior Biden appointee said political tampering under the Trump administration had “compromised the integrity” of some agency science. She cited specific examples, such as political leaders discounting studies that showed the harm of dicamba, a herbicide in popular weedkillers like Roundup that has been linked to cancer and subsequently ruling that its effectiveness outweighed its risks.

The broader list of decisions where staff say scientific integrity was violated is expected to reach about 90 items, according to one person involved in the process. It currently includes well-known controversies like the ricochet of decisions around Pebble Mine, a proposed copper and gold mine in Alaska’s Bristol Bay region, as well as rulings around relatively obscure toxic chemicals.

“Manipulating, suppressing, or otherwise impeding science has real-world consequences for human health and the environment,” the E.P.A. administrator, Michael Regan, said in an agencywide email message on Tuesday. “When politics drives science rather than science informing policy, we are more likely to make policy choices that sacrifice the health of the most vulnerable among us.”

He asked employees to bring “any items of concern” to the agency’s scientific integrity officials or the independent inspector general and pledged to encourage “the open exchange of differing scientific and policy positions.”

“I also promise you that retaliation, retribution, intimidation, bullying, or other reprisals will not be tolerated,” Mr. Regan wrote. 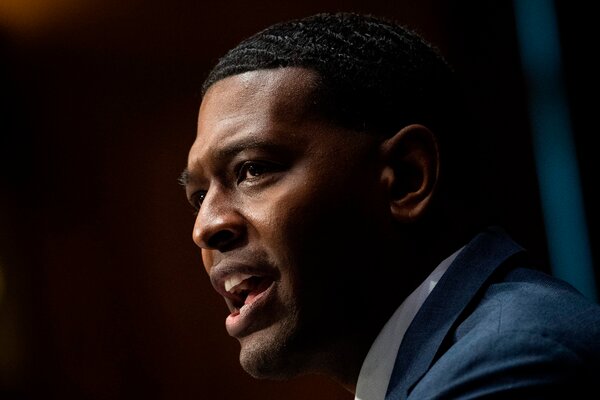 President Donald J. Trump’s well-documented attacks on science include doctoring a map with a black Sharpie to avoid acknowledging that he was wrong about the path of a hurricane and then pressuring scientists to back his false claim; meddling in federal coronavirus research; and pressuring regulators to approve Covid 19 vaccines and treatments. Those actions provoked bipartisan concern during his administration.

The E.P.A. was the epicenter of some of the administration’s most questionable decisions.

Mr. Trump’s first administrator, Scott Pruitt, removed the agency’s web page on climate change (which has since been replaced); fired and barred independent scientific advisers who had received grants from the E.P.A. (a policy that a court ultimately found to be illegal) and then replaced them with many industry representatives; and rolled back scientifically-supported policies such as limiting pollution from trucks with rebuilt engines after meetings with executives and lobbyists.

Mr. Pruitt’s successor, Andrew Wheeler, faced accusations that he repeatedly ignored and shut out his own scientists in decisions such as issuing a rule curbing but not banning asbestos; declaring the health effects of chlorpyrifos, a widely-used pesticide, “unresolved” despite years of agency research proving its danger to infants; and pushing through a policy (which has since died in the courts) to limit the type of health and epidemiological studies that could be used to justify regulations.

Former Trump administration officials said the effort by Mr. Biden’s E.P.A. to discredit their work, which they maintained was conducted with robust scientific discourse, was its own brand of politics.

“Every decision we made in the Trump administration was rooted in science and was based on both advice and concurrence with the career scientific team,” said Mandy Gunasekara, who served as Mr. Wheeler’s chief of staff. “Not all of them agreed, but that’s with any team.”

Jonathan H. Adler, director of the Center for Environmental Law at Case Western University, said he shared some of those concerns. Understanding how many people could die at a certain level of exposure to a chemical is science, he explained. Deciding whether that risk justifies lowering the threshold for that chemical’s use is a policy judgment.

“The line between what’s science and what’s policy is not always well guarded,” Mr. Adler said.

Michal Freedhoff, the E.P.A.’s new acting assistant administrator in the office of chemical safety, agreed in a recent interview that disagreements over how science should inform policy are common in every administration. But, Ms. Freedhoff said, what she discovered shortly after she joined the agency in January went well beyond that, and beyond what she was expecting to find.

She said she has had briefings meetings in which scientists have hesitated to explain how and why certain decisions were made during the Trump years, only to learn of multiple instances in which the researchers were told to disregard data or certain studies or were shut out of decision-making altogether.

Ms. Freedhoff also said career scientists and other employees had been forced to spend an “inordinate” amount of time helping politically connected companies obtain favorable classifications for their products.

The E.P.A. declined to specify the companies involved or their political connections, saying that some of the decisions were under review. But officials said one decision related to the claims that a small company could make for its pesticide. That involved at least three meetings with Trump administration appointees — unusual for what should be a routine staff-level decision.

In another instance, Biden administration officials said, career scientists were required to spend a significant amount of time helping a company that wanted to have its product classified in a way that required less E.P.A. oversight.