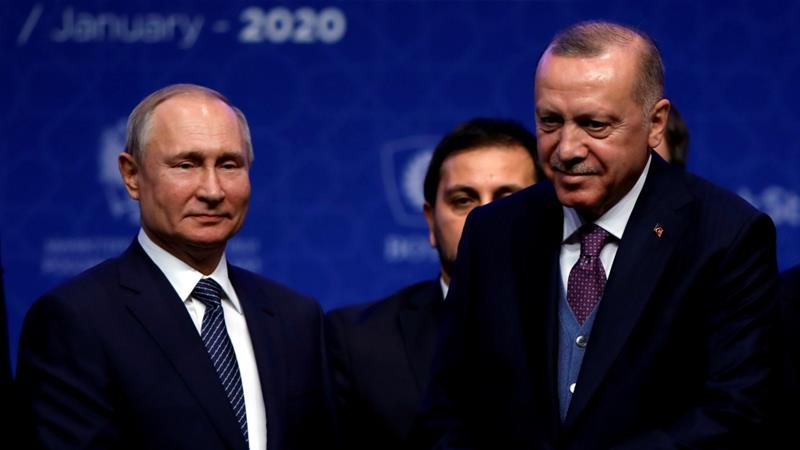 The Turkish and Russian presidents are meeting in Moscow for talks over a ceasefire deal amid intensifying fighting between Turkish and Syrian government forces in Syria’s northwestern Idlib province.

Last week, Turkey and fighters aligned to it launched a military operation in the region after at least 33 Turkish soldiers were killed in an air attack by the Russia-backed Syrian army.

Two Turkish soldiers died and several others were wounded on Wednesday in a fresh Syrian assault, which prompted Ankara to retaliate by striking military objectives.

Ankara says its army downed three Syrian planes, destroyed hundreds of vehicles and equipment, and killed more than 3,000 government soldiers since the operation was launched on February 27.

According to the United Nations, since December, one million people, mainly women and children, have fled fighting in Idlib, after the Syrian government launched a military assault in the last opposition-held stronghold in the country.

Thursday’s meeting in Moscow takes an even more crucial turn as it becomes a ground for salvaging a deteriorating relationship between two economic partners.

Before his visit, Turkish President Recep Tayyip Erdogan said he expected the talks with his counterpart Vladimir Putin to result in the rapid achievement of a ceasefire.

“This is still in play and Moscow’s main goal will be to force Ankara to accept a new reality on the ground that Syria will not roll back to previous positions,” said Marianna Belenkaya, an expert on the Middle East and fellow at Carnegie Moscow Center think-tank.

“Both parties will have to give in on something in order to broker a ceasefire, and for Russia, that means guaranteeing to Turkey that the Syrian offensive will stop soon.”

Muhittin Ataman, an Ankara-based Turkish professor of international relations, said the problems in Syria until now have been resolved through meetings between the two leaders.

“The bureaucratic and diplomatic talks before that did not make much progress in the previous years. This includes the 2018 Sochi agreement,” Ataman told Al Jazeera.

“And at the point we are at right now, particularly on the ground in Syria, this meeting seems to be the last hope for both sides to resolve the crisis,” he added.

Both sides are unhappy with each other’s efforts to implement the Sochi agreement on Syria signed in September 2018, which created a “de-escalation zone” with 12 observation towers around Idlib.

Regarding the deal, Russia accuses Turkey of not doing enough to separate “moderate” rebels from “terrorists”. They say the operation they launched in December is aimed at clearing “terrorists” from the region, in line with the 2018 deal.

Ankara says Moscow breached the ceasefire agreed upon in 2018 numerous times, including their latest offensive, and is not doing enough to rein in Damascus.

The Hay’et Tahrir al-Sham armed group, a former al-Qaeda affiliate that is considered a “terrorist” organisation by Russia and Turkey, controls a large portion of Idlib.

Russian Foreign Minister Sergey Lavrov said the Kremlin knows the meeting “will be difficult” but hopes new agreements will be found in the Sochi framework.

As the fighting goes on in the strategic town of Saraqeb, about 30km (19 miles) east of the city of Idlib, land control is, and will be, key.

“I expect Putin and Erdogan to reach agreements,” said Anton Mardasov, a non-resident expert of the Russian International Affairs Council, “for instance, the introduction of a buffer zone in the area of the M4 and M5 motorways and, possibly, of Turkish posts.”

Putin first turned down a meeting with Erdogan in January.

Five days later, Kremlin brushed the idea off, stating that Putin had “other plans” for March 5 – before effectively saying he would meet Erdogan.

“We are at a point that the Turkish-Russian relations might be harmed fundamentally in a way that is hard come back from, unless there is a decrease in tensions,” added Ataman, the Turkish analyst.

“This [if a solution is not reached in Moscow] would further complicate the Syrian crisis, and risk the deals made between the two sides on the ground up until today. Turkey’s military success and the large losses recorded by the Syrian government forces in the last few days are also likely to influence the course of talks in Moscow.”

International affairs expert Fyodor Lukyanov recently wrote in the Russian press, “Both sides are not linked by mutual interests or trust, but by the impossibility to achieve their goals without the other party’s cooperation.”

Most Russian analysts, therefore, believe that cooler heads will prevail and that an understanding will be found, preventing direct confrontation.