Agriculture minister Didier Guillaume said President Emmanuel Macron had “obtained” an agreement to keep the current Common Agricultural Policy spending at an EU summit in Brussels. But sources were quick to rebuke the incorrect claim as the bitter dispute over the bloc’s next seven-year budget rumbles on in the Belgian capital. Mr Guillaume said: “We have won the first battle, the Commission had a proposal that was no tolerable for €370 billion.”

“The president of the Republic has already obtained the 375 billion.” the agriculture minister claimed. 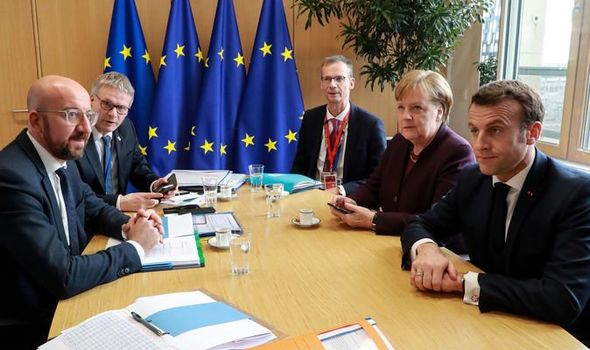 One said: “Nothing is done, no amount is recorded.

“The CAP has been attacked by several countries. This is our priority, so we are fighting.”

France has infuriated EU colleagues with claims that those blocking cuts to the EU budget are anti-European.

Yesterday President Macron said: “There is no compromise if we’re compromising European ambitions.

“It’s unacceptable to think that because the UK is no longer part of the EU, we need to give up on our ambitions.”

Brussels faces a €75 billion hole in its financing of its 2021-2027 spending plans after Britain’s departure from the bloc.

To plug the Brexit blackhole, Germany is facing extra net payments that are more than six times the extra that France will pay.

Internal negotiating documents, seen by Express.co.uk, show Germany would be expected to make net contributions of around €26 billion.

This is an increase of €10 billion a year on what Berlin currently sends to Brussels.

Whereas France would actually be better off by almost €1.5 billion compared to the last budget with a total net payment to the EU of just €10.5 billion.

Austrian chancellor Sebastian Kurz, whose country faces its net payments being doubled, told the French President that “our contribution must not grow endlessly”.

“We represent the interests of our taxpayers here. One is not anti-European if you want to save money,” Mr Kurz said.

Dutch prime minister Mark Rutte has vowed to fight back against any increases to member states’ contributions.

Ahead of yesterday’s talks, he suggested the debate was pointless until France concedes to shoulder more of the Brexit burden.

He said: “I don’t know what I will have to discuss.

“I cannot sign up to this proposal. I brought the new biography of Chopin with me.”