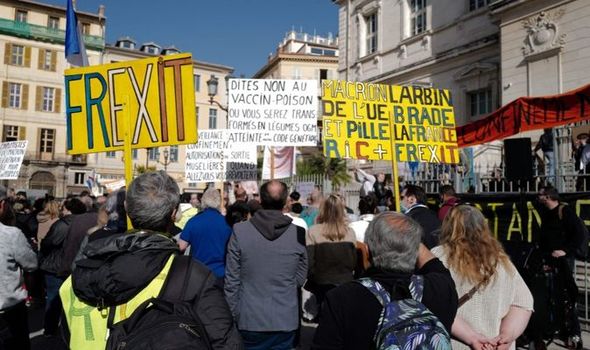 When adding the European flag to the Arc de Triomphe, MEP Nathalie Loiseau described it as the flag “that gave us 70 years of peace”. But historian Olivier Delorme has strongly denied the idea, insisting instead that the idea of the EU bringing peace is just a fable and an “intellectual swindle”. In an interview with French news magazine Marianne, Mr Delorme completely redefined the relationship between the EU and peace.

Mr Delorme said: “The first cause of peace in Europe was the crushing of Germany in 1945.

“The country was never a finished nation and always saw itself as having an imperial destiny.

“Here we fall into the other intellectual swindle of the mantra “Europe is peace”: to say that war is the result of nationalisms.

“On the contrary, it is the result of imperialism. The First World War was started by empires, not by nations.”

Mr Delorme also referenced the lack of wars between Japan, China and Korea since the fall of Imperial Japan, despite lacking any European Union equivalent.

He attributes the peace seen in Europe for the last 70 years not to the EU, but to the consequences of World War 2 and the Cold War.

He said: “In addition to the crushing of Germany, it is the atomic weapon and the balance of terror that will contribute to European peace.

“As soon as the Americans and Soviets are able to destroy their opponents with the nuclear bomb, war becomes impossible and Europe can no longer be a battlefield.

“This risk of mutual destruction prevents any confrontation between the two blocs.

“Today, the EU is also unable to protect its member countries from conflicts with other powers.

“Cyprus is still partly occupied and colonised by Turkey, which remains a candidate to join the EU.

“The European organisation was also unable to support Greece when it was attacked by Turkey in the summer of 2020.”

Mr Delorme was also unconvinced by the idea that economic cooperation works to promote peace.

He said: “It would be if it were based on cooperation.

“However, the EU is based on the principle of free and undistorted competition. It prohibits states from protecting their production and their workers.

“The euro is overvalued for certain countries such as France, Greece and Portugal. This leads to internal devaluation.

“To compensate, salaries are lowered and social welfare budgets are cut.

“On the other hand, countries like Germany or the Netherlands have an undervalued euro compared to their economies, which gives a considerable advantage.

“Europe, as it is constructed, results in weakening the weak while strengthening the strong.

“It is not proposing a policy of peace but of economic warfare at the expense of the weakest.

“So we have to invent fables. Europe is peace. It’s a nice phrase, but it’s still a fable.”