As a graduate student in the 1980s, Tracy Stone-Manning was linked to a tree-spiking effort by environmentalists. Republicans say that makes her unfit to lead the Bureau of Land Management. 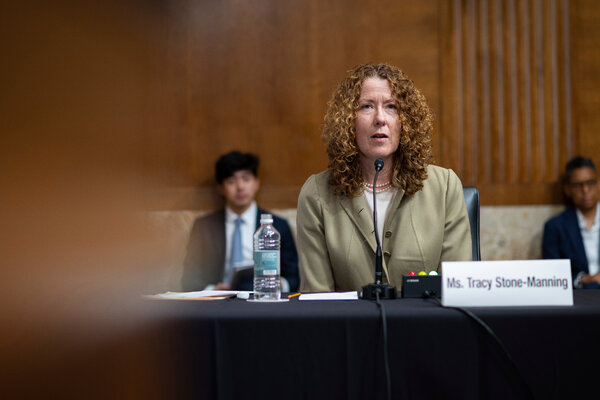 WASHINGTON — Democrats are preparing to muscle through the nomination of Tracy Stone-Manning to head the Bureau of Land Management, despite united opposition from Republicans who have branded her an “eco-terrorist” because of her involvement in a tree-spiking episode as a graduate student in the 1980s.

The vote over her nomination, scheduled for Thursday in the Senate Committee on Energy and Natural Resources, sets up a battle between Republicans and Democrats over an agency at the center of climate policy.

The Bureau of Land Management is an agency within the Interior Department that oversees grazing, logging and drilling on 245 million acres of public land and manages 700 million acres of mineral rights. It is responsible for balancing oil, gas and coal extraction with recreation and the protection of natural resources. It also is key to President Biden’s goal to phase out oil and gas drilling on federal lands — a plan that is being challenged by 15 states led by Republican attorneys general.

“The concerns that many folks have about Stone-Manning’s nomination is that she’s going to be more on the side of protecting public lands for public uses, and the folks who want public lands to be used for more development don’t like that,” said Mark Squillace, a professor of natural resources law at the University of Colorado Boulder.

“These other issues are being used as a way to block her confirmation,” he said. “I don’t think anybody really cares what she did 32 years ago.”

Ms. Stone-Manning, 55, has built a career in environmental policy, working as an aide to Senator Jon Tester of Montana and as chief of staff to former Gov. Steve Bullock of Montana, both Democrats, as well as the head of Montana’s environment agency, where she gained a reputation as a bridge-builder among environmentalists, ranchers and fossil fuel interests. She is currently the senior adviser for conservation policy at the National Wildlife Federation, a nonprofit conservation group.

But Republicans argue that her actions in 1989, and her account of that episode in the intervening years, make her unfit for the post. They wrote to President Biden asking him to withdraw her nomination and they plan to vote against her as a bloc in the committee.

Republicans also fought the choice of Interior Secretary Deb Haaland, the first Indigenous cabinet secretary, because of her opposition to expanded oil and gas drilling on public lands. While Ms. Haaland narrowly won confirmation, that process morphed into a proxy fight over climate policy.

Conservatives were more successful in March in forcing the Biden administration to withdraw its pick for deputy interior secretary, Elizabeth Klein, after senators from coal and oil states objected to Ms. Klein’s belief that the nation needs to curb its use of fossil fuels.