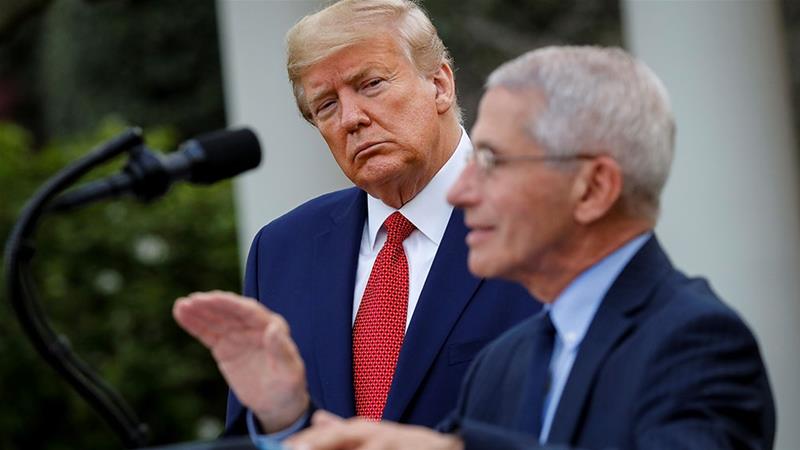 Top US scientist Dr Anthony Fauci has again dismissed claims that the coronavirus was created in a Chinese laboratory.

“If you look at the evolution of the virus in bats and what’s out there now, [the evidence] is very, very strongly leaning toward this could not have been artificially or deliberately manipulated,” Fauci, the director of the National Institute of Allergy and Infectious Diseases, told National Geographic magazine in an interview published on Monday.

“Everything about the stepwise evolution over time strongly indicates that [this virus] evolved in nature and then jumped species,” Fauci said.

US President Donald Trump has claimed he has seen evidence that the virus began in the Chinese state-backed Wuhan Institute of Virology. He has not provided or detailed the evidence, however.

Secretary of State Mike Pompeo said on Sunday there was “a significant amount of evidence” that the virus emerged from a Chinese laboratory. He did not dispute US intelligence agencies’ conclusion that it was not man-made, however.

The Wuhan Institute of Virology has dismissed the allegation, and other US officials have downplayed the likelihood that it is true.

China has called the claims “insane”.

Most experts believe the virus originated in a Wuhan market selling wildlife and jumped from animals to people.

Trump, speaking to reporters outside the White House before leaving on a trip to Arizona on Tuesday, said the US would release its report detailing the origins of the novel coronavirus over time, but gave no other details or timeline.

Fauci allowed to testify before Senate, not House

Also on Tuesday, Trump said Fauci would be allowed to appear next week before a panel in the Republican-controlled US Senate examining the country’s coronavirus response but could not testify to the Democratic-led House of Representatives.

Trump, speaking to reporters at the White House, defended his decision to block the nation’s top infectious disease expert from appearing before the House, saying he was being set up by Democrats who hate him and want to win back the White House in November’s presidential election.

“Exceptions may be made only with the express approval” of White House chief of staff Mark Meadows, Politico quoted the memo as saying.

A House Appropriations subcommittee that oversees health programmes had been seeking testimony from Fauci for a May 6 hearing, but the White House last week said his appearance would be “counterproductive”.

Fauci is scheduled to appear May 12 before the Senate Health, Education, and Labor and Pensions committee along with other top US health officials.

Food and Drug Administration Commissioner Stephen Hahn, Centers for Disease Control and Prevention Director Robert Redfield, and Health and Human Services Assistant Secretary Brett Giroir are also scheduled to appear before the Senate hearing next week focused on “safely getting back to work and … school,” according to the committee.

Fauci has not shied away from contradicting Trump claims if they go against scientific data or evidence.

In an interview with CNN on Monday night, Fauci warned against a rush to reopen state economies, saying it may have dire consequences down the road.

Separately on Monday, Fauci also criticised state governments that were beginning to reopen their economies, despite a push by Trump.

“How many deaths and how much suffering are you willing to accept to get back to what you want to be some form of normality sooner rather than later?” Fauci asked.