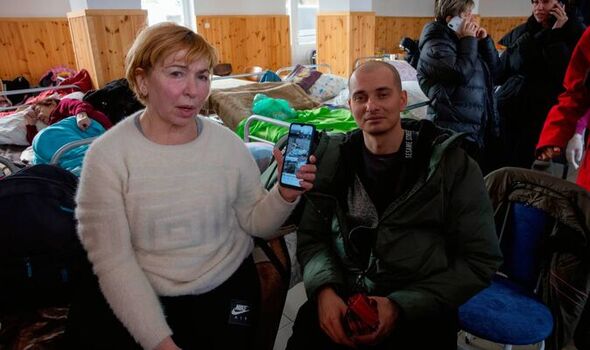 But the 32-year-old immigration lawyer was looking forward to a family reunion yesterday after being granted exemption from military service on medical grounds. Yurii, who has epilepsy, walked across a checkpoint at Barabas on Ukraine’s border with Hungary after a two-day journey from his Kyiv home.

He said: “At this moment, I just want to build my new life.

“I hope to meet my wife and daughter in a few days at Krakow, Poland, and we will plan our future.

“I am really looking forward to it and I cannot believe I crossed the border.”

Sitting on a bed in the dormitory of a refuge centre set up in a community hall, he added: “A week ago I sent my wife and daughter to Poland by train.

“Then when fighting started and tanks moved into Kyiv, I became worried about my own safety.

“I lived near Ukraine military positions and I felt that if the Russians attacked them, they would destroy my home as well. So It was better to leave the city.”

Yurii went on: “Russian tanks were just 20km from my house.”

He said he had documents supporting his claim for exemption from service which is mandatory for men aged up to 60. But when he first tried to cross into Hungary, the border guards turned him back, saying they did not believe him.

“The next day I tried one more time and they let me go,” he said.

He walked across with another Kyiv evacuee, Alexandra Hamchukova.

The former TV worker, 70, said: “Lots of schools and other buildings are destroyed by bombs in Kyiv.

“The Russians have not been doing accurate bomb drops.”

Refugees clearing the checkpoint without someone to meet them were bused to a refugee centre.

They were given hot drinks, food, blankets, clothes, medicine and the chance to rest on beds laid out in the hall.

More than 190,000 refugees have fled Ukraine via Hungary.