WASHINGTON — During his presidential campaign, Joseph R. Biden Jr. said the United States should mobilize $20 billion to stop the destruction of the Amazon rainforest and impose “significant economic consequences” if deforestation continued.

“The Amazon rainforest is absolutely essential to the world. It stabilizes the Earth’s climate and rainfall, sustains many tens of millions of people and is home to more wildlife than anywhere else,” said Bruce Babbitt, a former Arizona governor and Interior secretary during the Clinton administration.

“The Congress and American people have a long history of supporting conservation of the Amazon rainforest. It is something inspiring and concrete that they can get behind,” wrote the group, which includes two former Environmental Protection Agency administrators who served under Republican administrations, Christine Todd Whitman and William K. Reilly; Todd D. Stern, President Barack Obama’s special envoy for climate change; Tim Wirth and Frank E. Loy, both of whom served as under secretaries of state for global affairs in the Clinton administration; and Stuart E. Eizenstat, who led the United States delegation in the negotiations of the Kyoto Protocol climate accord of 1997. 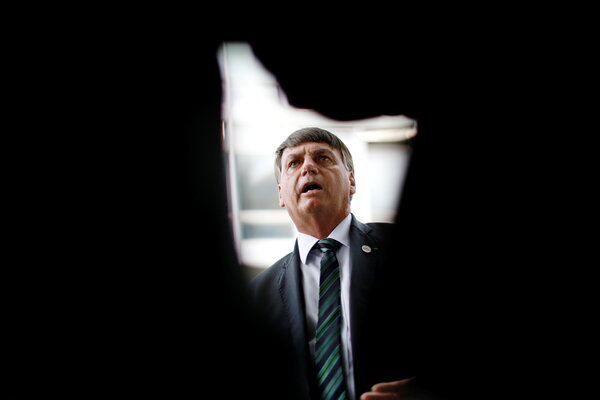 The coalition is urging Mr. Biden to call a White House summit to press corporate leaders to help finance at least one billion tons of greenhouse gas reductions in the Amazon by 2025. They also called on Mr. Biden to expand “debt-for-nature” swaps and to negotiate such agreements with governments in the Amazon region.

The heart of the proposal involves making the avoidance of deforestation central to trade agreements and closing loopholes in laws meant to deter forest crimes abroad.

Companies are already prohibited from importing timber from forests that are illegally chopped down. But that does not extend to beef, soy or other agricultural commodities that may be raised or grown on illegally deforested lands.

“We are unintentionally creating a financial incentive for criminals to set fire to the Amazon and convert it into farmland,” said Nigel Purvis, a former United States climate negotiator and chief executive of Climate Advisers, a Washington-policy group.

A spokesman for John Kerry, Mr. Biden’s international climate envoy, said the office will include deforestation experts, and protection of the Amazon “will be an important element of U.S. climate diplomacy.”

In a letter to Mr. Biden last week, Mr. Bolsonaro — after weeks of repeating the baseless claims of voter fraud perpetrated by his close ally, Donald J. Trump — expressed hope that the United States and Brazil could enter into a trade agreement.

Mr. Babbitt said “meaningful environmental provisions in trade agreements” could be the single most important way to curb deforestation.

Scientists have long said that any hope of preventing global temperatures from rising to catastrophic levels involves restoring the world’s degraded forests, particularly the Amazon.

Under Mr. Bolsonaro, deforestation in the Brazilian Amazon hit a record high last year when about 4,280 square miles, an area slightly smaller than Connecticut, was destroyed, according to Brazil’s national space research agency.

Thomas Shannon, who served as ambassador to Brazil between 2010 and 2013, said pressure on Mr. Bolsonaro alone won’t work.

“Brazil will not be bullied,” Mr. Shannon said. President Biden’s challenge, he added, “is fashioning a diplomacy that convinces Brazil that there’s reason for it to re-engage in the world,” he said.