The UK is set to be battered by gale-force winds in the coming days, before temperatures plummet to freezing next week. Strong winds are expected in the UK as two major hurricanes – Ian and Fiona – are “drawing up warm air from the tropics”. This is causing areas of low pressure to move towards the UK, causing showers and wind.

In this period, he said, eastern England will see “persistent and heavy rain”, while the west of the country will be hit with wind and “blustery showers”.

Moving into next week, temperatures will drop, with parts of Scotland seeing lows of 0C.

Weather forecaster WXCharts predicted lows of 0C in Inverness, 1C in Manchester and 5C in Birmingham by October 10. 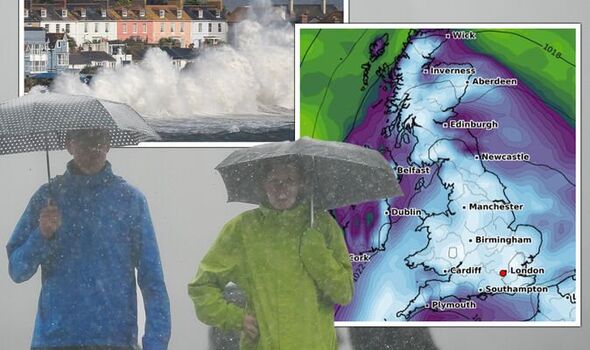 Meanwhile, London will be warmer with lows of 10C.

Netweather meteorologist Nick Finnis said: “Looking ahead for the first working week of October and it’s looking an increasingly unsettled picture, Monday’s looking generally dry and bright for England and Wales, Scotland and N. Ireland wet and windy thanks to a waving frontal system.

“A cold front will push southeast into England and Wales on Tuesday but will weaken, still some cloud and patchy rain along it, squally showers for Scotland and N. Ireland where it will turn very windy with gales. 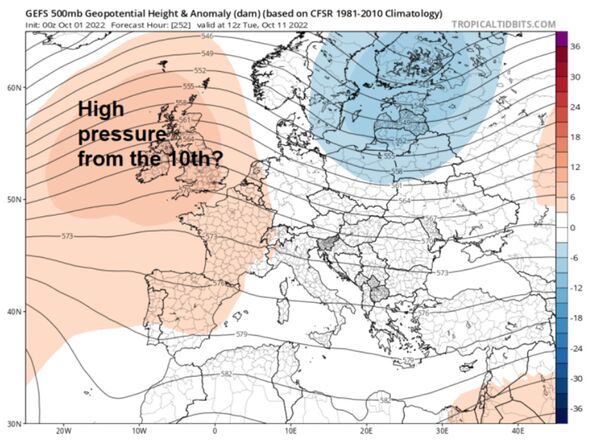 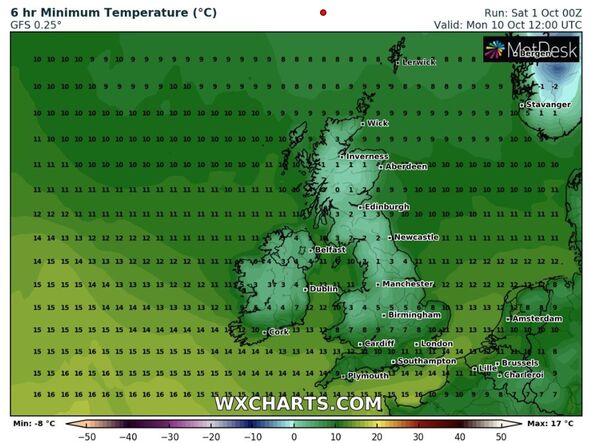 “An active frontal wave looks to push northeast across the UK Tuesday night, bringing persistent and heavy rain through the morning across many areas before clearing eastern England early afternoon.

“A brisk westerly wind blowing in blustery showers for many on Thursday and Friday, frequent in the west, perhaps merging into longer spells of rain across the north.”

Meanwhile, Meteorologist Alex Deakin explained that the unsettled conditions are being caused by two US hurricanes.

DON’T MISS:
Gusts of 55mph to batter UK in hours as ‘most autumnal day’ hits [REPORT]
UK lightning map shows when extreme weather most likely in your region [ANALYSIS]
Meteorologist’s verdict on UK Indian summer as temperatures to soar [INSIGHT] 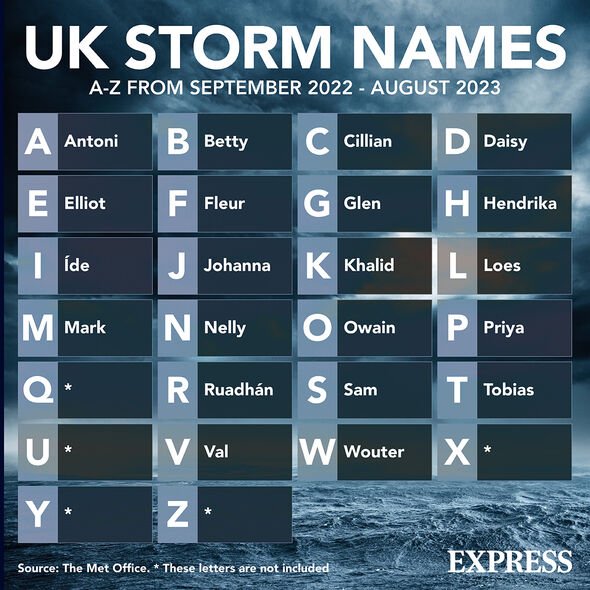 He said: “Hurricane Fiona and Hurricane Ian are drawing up warm air from the tropics.

“What drives the jet stream is the contrast between warm and cold, and with cold air heading south from the poles hitting that warmer air that’s been drawn up by those tropical systems, the jet stream is becoming enlivened.

“That strong wind high up in the atmosphere will impact our weather by taking areas of low pressure our way.” 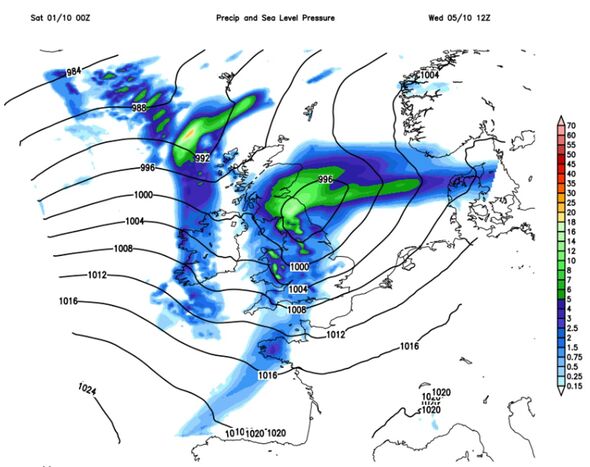 “It’s a blustery day on Saturday with a mixture of sunshine and showers. If you have plans for Saturday keep up with the forecasts.

“If you have plans for Sunday, it is a drier and brighter day, and most places will be dry and bright with a bit of sunshine.”

He added: “There is another area of low pressure out in the Atlantic and that’s how we go into next week”