Heiko Maas swallowed his pride and congratulated England and his British counterpart, Dominic Raab, after England’s stunning 2-0 defeat against the old rivals. Prior to the match, Maas and Raab placed a bet that the loser had to buy the other a crate of beer.

“A German saying goes ‘Wettschulden sind Ehrenschulden’ or ‘betting debts are debts of honour’. So, you will get that crate of beer.

“Germany, you put up a good fight – hopefully next time!” 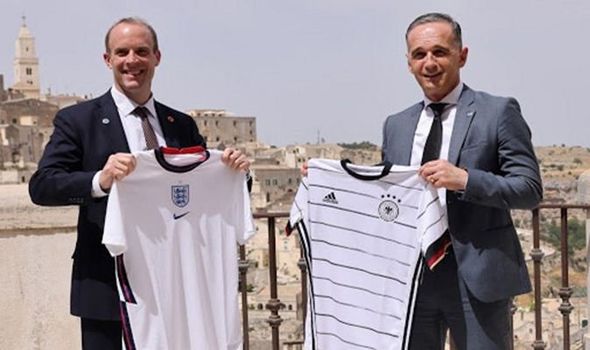 Raab gleefully replied: “Thank you Heiko Maas, a hard-fought game, and we will enjoy the German beer!”

The exchange received a lot of attention on social media. British Ambassador to Germany, Jill Gallard, said she was “happy to recommend some really excellent German beers”.

Another tweeter replied: “This is what makes the sporting rivalry between England and Germany so special. A profound mutual respect, regardless of who wins.”

A third said: “Although I doubt this agreement covers Brexit, here is an elegant emphasis by Dominic Raab and Heiko Maas that the UK and Germany continue to remain aligned on most foreign policy issues – and enjoy a healthy sport competition.”

The bet was announced just before the game yesterday when Maas said: “My UK colleague and I agree on almost anything in international affairs – but not on who will win at Wembley tonight. So, how about a little wager, Dominic Raab? The winner gets a crate of beer.

“Germany didn’t lose its last seven matches at Wembley. Keep it that way!”

Germany’s impressive record at Wembley came to a crashing end last night when the Three Lions beat them 2-0 to reach the Euro 2020 quarter-finals.

It was England’s first win over Germany in a knockout game in a major tournament since 1966.

England will take on Ukraine in Rome on Saturday (July 3).