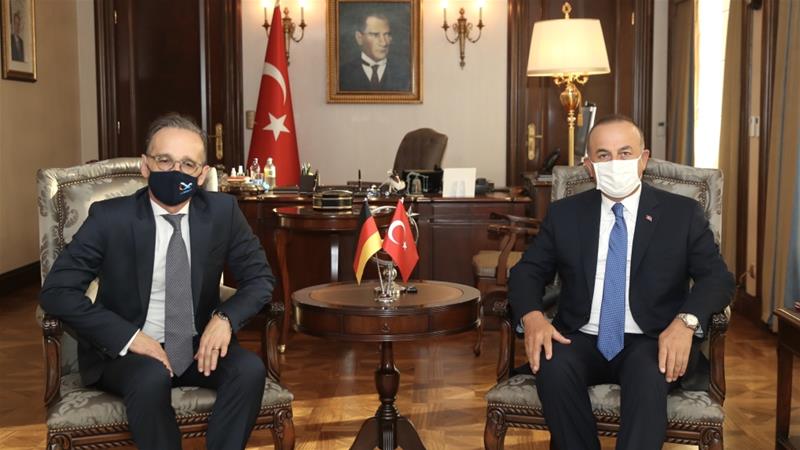 Germany’s Foreign Minister Heiko Maas has appealed for de-escalation of tension in the eastern Mediterranean between NATO allies Greece and Turkey, warning that “a spark could lead to a disaster”.

While a visit to both countries failed to make any concrete deals, Maas said on Tuesday there is still a readiness for dialogue by the two neighbours as both sides do not want to settle their dispute by military means.

“I hear from all sides that the readiness to dialogue exists and that is why we regard it as achievable,” Maas said at a news conference in Ankara with his Turkish counterpart, Mevlut Cavusoglu, after earlier visiting Greece.

Greece and Turkey have been locked in an increasingly acrimonious dispute for weeks – placing their militaries on alert and sending warships to shadow each other – over maritime boundaries and offshore prospecting rights.

Both countries announced military exercises on Tuesday in sections of a broad area between Crete and Cyprus, where the Turkish research vessel Oruc Reis is carrying out seismic research escorted by Turkish warships.

Athens says the vessel is over the Greek continental shelf, where it has exclusive rights on potential undersea gas and oil deposits, and has sent its warships to shadow the Turkish flotilla.

Late last year, Ankara reached an agreement with the internationally recognised Government of National Accord (GNA) in Libya that it says grants Turkey drilling rights across a corridor of the eastern Mediterranean – much of it within the maritime jurisdiction Greece also claims.

Greece, Cyprus and other regional actors have denounced the Turkish-Libyan agreement as “illegal”, which Turkey denies.

“The current situation in the eastern Mediterranean is … playing with fire, and any spark – however small – could lead to a disaster,” Maas said earlier after meeting his Greek counterpart, Nikos Dendias.

“No one can have an interest in that, and certainly not in a military confrontation between NATO partners and neighbours.”

Maas said he had travelled to Athens with two messages: “One message is that Germany and the whole European Union stand by Greece in firm solidarity.”

“The other – equally important – message is that what we now need absolutely and immediately are signals of de-escalation and a readiness for dialogue,” he said.

For his part, Cavusoglu said on Tuesday Greece must abandon its “maximalist approach” and conditions for dialogue to begin, adding that Ankara also expects the EU to act as an “honest and objective” mediator.

“We are open to talks without pre-conditions,” he told reporters. “But, when one side starts imposing pre-conditions, then there are many things we will put forth too. Before anything, Greece needs to abandon its maximalist approach,” he added. 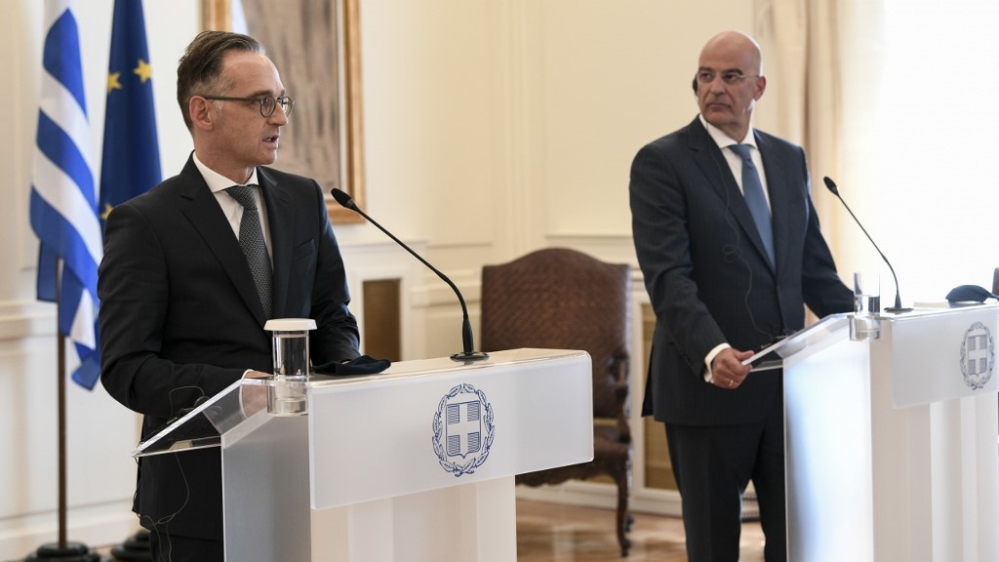 Dendias, meanwhile, accused Turkey of continuing to provoke its neighbour and displaying “neo-Ottoman” ideology. He said Greece would protect its sovereign rights and interests against its much bigger and more heavily armed neighbour.

“As we speak, Turkey continues to act illegally, to escalate, to provoke,” Dendias said. “Instead of a de-escalation, we are witnessing new provocations. We are witnessing the attempt to implement expansionist aims against neighbours and allies.”

Lawrence Brennan, a retired US navy captain and a Professor of Admiralty and International Maritime Law at Fordham Law School told Al Jazeera that Greece and Turkey will need to look to compromise.

The problem has been escalating for months, there is a risk of military intervention and the rhetoric continues to heat up, Brennan said.

“To have two NATO allies come to blows, whether it’s intentionally or accidentally… would be a horrible event that would set back progress and economic development for years if not decades,” Brennan said.

Maas’s visits came as Greece begins a navy and air force exercise southeast of Crete and south of the Greek island of Kastellorizo.

Turkey’s defence ministry tweeted that two Turkish frigates and an Italian destroyer also conducted training in the eastern Mediterranean on Tuesday “to improve coordination and interoperability”.

A Turkish official had said the training would last for just a few hours.

Adding to the tangle of overlapping drills, Cyprus’s defence ministry said warplanes and navy ships from France, Italy, Greece and Cyprus would be holding air and sea military exercises off the east Mediterranean island nation starting on Wednesday.

France and Greece will deploy both aircraft and warships as part of the August 26-28 drills, while Cyprus will activate its air defence system to test its capabilities.

“A binding and peaceful solution of the disputed questions in the eastern Mediterranean ultimately will only be possible via direct talks between Greece and Turkey, as already were agreed once and should actually long since have taken place,” Maas said.

“It is clear that such talks can only take place and be successful in a constructive environment, and for that, all destructive activities must be ended and provocations refrained from in the time ahead of us,” he added.

The talks come ahead of an EU foreign ministers conference set to take place on Thursday and Friday in Berlin.