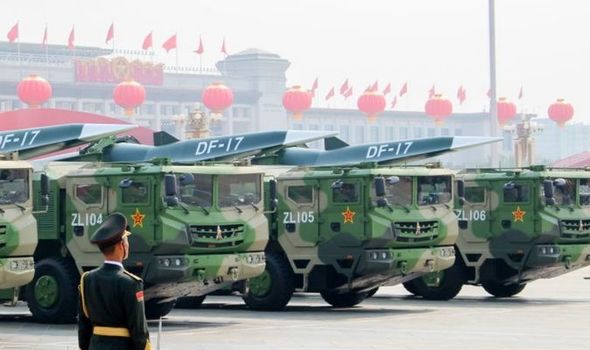 His escape from Beijing has allowed Britain and the US to accelerate defensive programmes against the use of hypersonic missiles. It could also take China two years to tweak its systems and “render this intelligence ineffective”, sources said.

Described as a rocket technician, the Chinese national was attached to the stateowned Aviation Industry Corp of China, where he helped develop a mid-range hypersonic boost-glide vehicle capable of carrying DF-17 missiles to a range of up to 2,000 miles.

Sources say the scientist, in his 30s, is connected with a more recent hypersonic missile delivery system that can circle the globe before descending from space and use heat-seeking technology to strike any target on Earth.

Despite his apparent success, however, it was resentment at having been passed over for promotion – rather than political dissent towards his masters in Beijing – which persuaded him to make contact with a British intelligence asset in Hong Kong at the end of September last year. During that first, tentative approach, he told the middleman he possessed detailed information about the hypersonic glide vehicle.

Knowing he faced a firing squad if discovered, he demanded asylum for himself and his wife and child.

A call was made to Vauxhall Cross – the London HQ of the Secret Intelligence Service, more commonly known as MI6 – and a three-person team, comprising two intelligence officers and a technical specialist, were readied to deploy to Hong Kong. The CIA was also informed.

Cautious that the scientist could be a Beijing plant, a cat-and-mouse game developed over the next few days in which the scientist’s credentials were “copperbottomed”. It was during this process that the technician – an avid fan of cricket who is believed to have once studied in England – began to reveal select details about China’s latest hypersonic development.

Eventually, a plan was hatched in which he and his family would travel to the former British colony using a specially developed route. Once there, the scientist was spirited to a secure location where he was debriefed by the two men and a woman which made up the MI6 team.

While most of the technical information offered by the scientist was carried in his head, he was also able to smuggle out technical data. The MI6 team were joined by a two-man team from the CIA. A day was given over for a lengthy debriefing before arrangements were made to fly to a more secure location – a US air base in Germany – then on to America via the UK.

The US is still behind both Russia and China, which launched “more ballistic missiles for testing and training than the rest of the world combined” in 2019, according to a 2020 US Department of

Speaking about the defection, an intelligence source said last night: “He was extremely co-operative. This is an intelligent man; a man who keenly follows cricket but prefers Jack Daniels to lager, a man who has played a key role in the development of hypersonic weapons in China, and a man who felt aggrieved by the way he had been treated.

“His decision to make contact wasn’t taken on ideological grounds but rather in a firm belief that his talents should be recognised and more greatly appreciated.”

The source added: “The fact we are in possession of certain details about the operational capability of this hypersonic glide missile puts us in a position we did not expect to be in at this time.

“It will probably buy us two years. We estimate it will take China two years to be able to make changes in its programme sufficiently substantial as to render this intelligence ineffective. In this sphere, two years is a very long time.”

The Foreign Office said it did not comment on intelligence issues.