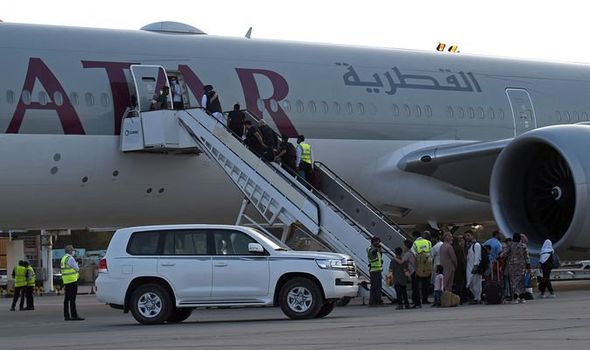 Foreign Secretary Dominic Raab said: “We are grateful to our Qatari friends for facilitating a flight carrying 13 British nationals from Kabul to safety in Doha.”

He added: “We expect the Taliban to keep to their commitment to allow safe passage for those who want to leave.”

Yesterday’s departure marked a significant breakthrough between the US and the Taliban as the militants try to reopen Kabul airport.

It was recently a scene of chaos and terror, where suicide bombers killed 169 Afghans and 13 US service members.

Qatari officials said the flight had landed carrying humanitarian aid before taking off with the passengers.

From the tarmac at the airport, Mutlaq bin Majed al Qahtani said: “Everyone has tickets and boarding passes”. He said another flight is due to take off today, adding “Hopefully, life is becoming normal in Afghanistan.”

But Afghan journalists yesterday revealed they are being targeted by the Taliban.

Zaki Daryabi, editor-in-chief of the Etilaatroz newspaper, said five colleagues had been beaten with pipes and cables and “tortured brutally” for hours by militants who told them: “You are lucky you weren’t beheaded.”

One image he shared shows reporter Neamat Naqdi grimacing in pain as colleagues help him to dress.

Zaki said: “That little hope I had for the future of media… in this country is destroyed.”

The Taliban yesterday insisted Afghans who served with British and American troops and diplomats would not be hunted down.

Mullah Mohammad Hasan Akhund, named by the Taliban as Afghanistan’s new Prime Minister, said: “The movement is disciplined and controls its gunmen. And we have not harmed anyone because of his previous actions.”

He added: “The stage of bloodshed, killing and contempt for people in Afghanistan has ended.”

But a female former judge has warned women taking part in protests about their rights that they are being followed.

Marzia Babakarkhail, who fled Afghanistan in the 1990s after the Taliban tried to kill her, said: “Our enemy are working hard to finish us. They are following the women who were in the protests, they are searching for those women and they will punish them.”