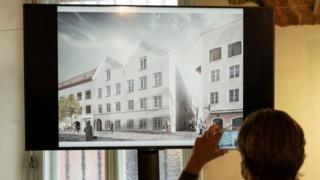 Austria has unveiled plans to “neutralise” the building where Nazi German dictator Adolf Hitler was born, by turning it into a police station.

The government bought the building under a compulsory purchase order in 2016 after a lengthy dispute.

Officials announced it would be turned into a police station in November.

Now an Austrian architecture firm will carry out the changes designed to stop the site, in Braunau on the border with Germany, attracting neo-Nazis.

“A new chapter will be opened for the future from the birth house of a dictator and mass murderer,” Austrian Interior Minister Karl Nehammer told reporters on Tuesday.

The winning company – Marte.Marte, picked from among 12 candidates – submitted a plan which will cosmetically change the façade of the building and give it a new roof. Work is expected to be completed by 2023 and will cost about €5m ($5.6m; £4.5m).

“The neutralisation of this whole location was ultimately at the heart of this result,” interior ministry official Hermann Feiner told reporters.

Little marks out the house to suggest it is where the Nazi leader was born. A rock outside which reads “Fascism never again” is to be moved to a museum in the capital Vienna. A local historian however told the BBC that it was very important that the stone should stay in Braunau.

The genocidal dictator himself barely spent time at the property. He was born in an apartment in the 17th Century building in 1889, but his family left a few weeks later for another address in the area, and left the town permanently when Hitler turned three.

Neo-Nazis have however travelled to the site, and authorities want to ensure it does not attract others in the future.

Austria was annexed by Nazi Germany in 1938, and for decades presented itself as one of the first victims of the regime.

But many at the time welcomed the move, known as the Anschluss or connection, and Austria has begun to speak about its own complicity in Nazi crimes.