Temperatures in London could reach 33C (91.4F) today and some regions in Wales could see temperatures reaching 34C (93.2F), according to the Met Office. But on Thursday afternoon the weather could turn as thunderstorms may form across the West.

Jo Farrow at Net Weather said: “There will be more convective action further south by Thursday evening with a plume of very warm air from Spain.

“For most Thursday will be a hot, sunny day with a south-easterly breeze. The heat will be more widespread. Northern Ireland into the low/mid 20sC. Scotland could see 30C. England and Wales feeling very warm and muggy with 31 to 33 maybe 34C.”

Wednesday has been the hottest day of the year so far with a temperature of 32.6C (90.7F) recorded at London’s Heathrow Airport at 2.46pm.

Met Office meteorologist John Griffiths said there was a “low chance” that the Welsh Marches – the region along the Welsh border – could experience temperatures of 34C (93.2F) “very locally”. 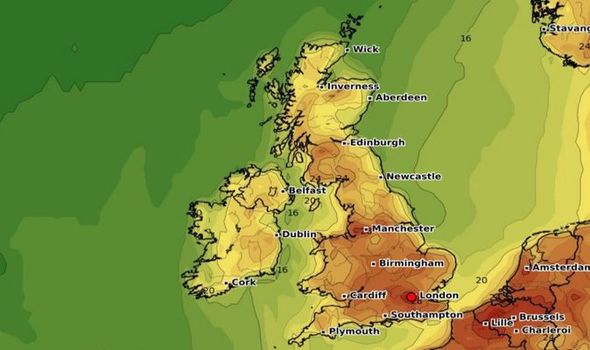 Members of the public have been advised to take care if swimming in the water to cool down.

The warning comes as Thames Valley Police announced on Wednesday evening they had found the remains of a missing man at Lulle Brooke in Cookham, Berkshire.

The man, who was in his 30s, was thought to have had issued in the water on Tuesday evening.

Thunderstorms are expected to form in the south west and south east of England, Wales, western Scotland and Northern Ireland from 4pm on Thursday.

The Met Office has declared a yellow weather warning for those regions until 9am on Friday. 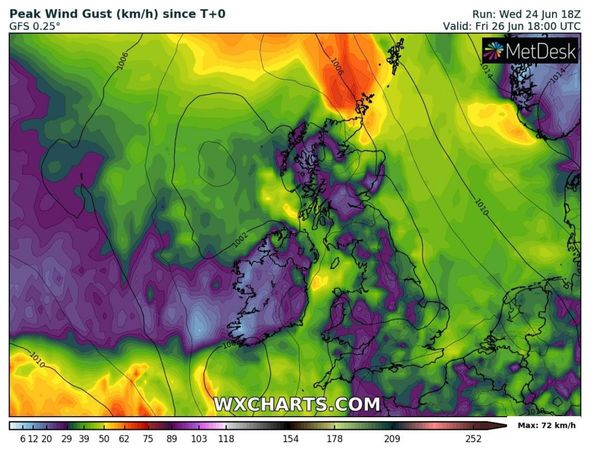 Some 30mm to 40mm of downpours could be recorded in less than two hours.

The downpours are set to continue from midday on Friday through to 6am on Saturday, with a further yellow warning announced countrywide.

Parts of the country affected by the rain could see “torrential downpours” with between 30mm to 50mm of rain falling in an hour.

The Met Office raised its heat alert level to three, as health officials urged those most at risk to shield themselves amid the “exceptionally hot weather forecast this week”.

Dr Michaela Hegglin, associate professor in atmospheric chemistry at the University of Reading’s Department of Meteorology, said Thursday could see some of the “highest UV levels ever recorded” in Britain. 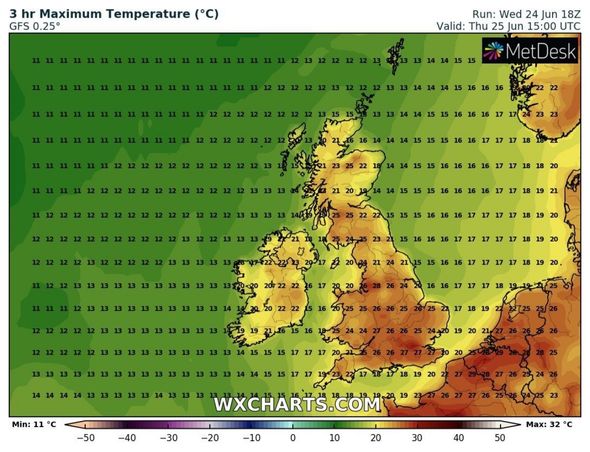 She said: “This is because of a combination of factors. We are at the summer solstice, when the sun is almost directly overhead at one o’clock.

“UV levels this high are rare in the UK, so people with light skin should be very careful to avoid getting burnt.

“While UV is important for getting vitamin D and keeping us healthy, too much of it can cause skin cancer or eye cataracts.”

Emer O’Connell, consultant in public health at PHE, said people should check regularly on those who are at a higher risk, as many are still shielding at home due to the coronavirus pandemic.

“You will need to do things differently this year, for example keeping in touch by phone,” she said. 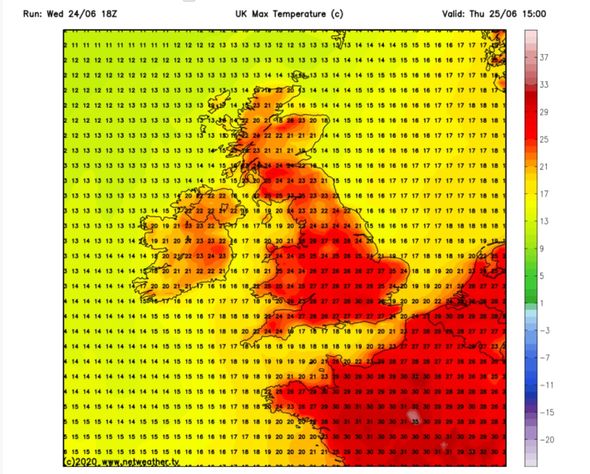 Those venturing the high streets have been warned they could be exposed to the sun for long periods should they queue outside shops.

Dog owners have been urged to avoid walking their pets during the hottest period of the day.

Vets Now, a provider of emergency veterinary care, cautioned that the average survival rate of a dog struck by heatstroke was 50 percent.

The RSPCA said it had recorded 330 calls regarding animal welfare issues and the hot weather since March 23.

It added that it was forecasting “hundreds more” as the weather gets warmer this week.

London Fire Brigade has urged members of the public not to light barbecues on dry grass, not to drop cigarettes or matches on the ground, and not to leave waste including glass bottles lying around as they could pose a fire hazard.