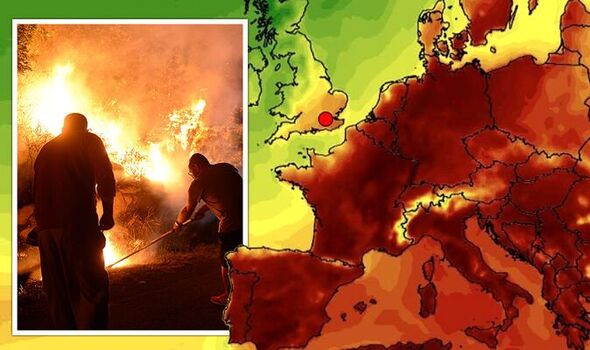 An orange alert has been raised in nine of Spain’s provinces for “intense heat”, with temperatures set to rise above a blistering 42C.

The eastern region of Extremadura will see the hottest of the temperatures on Monday.

Cáceres and Badajoz, where Extremadura is located, is joined by Salamanca, Toledo, Seville, Córdoba, Jaén and Ourense in putting out the weather warnings.

Staying put on a yellow warning for the moment are Andalusia, Madrid, the Basque Country and Aragon.

Also under this umbrella of yellow warnings are Catilla y Leon, Catalonia, Navarre and La Rioja.

Catalonia and Valencia are likely to feel the force of thunderstorms as the day wears on.

The blistering temperatures are expected to last through to the middle of the week.

Most of mainland Spain and the Balearic Islands will see the mercury soar above 35C, with Galicia set to record 38C.

Throughout the central region and the capital through down to the south and Mediterranean coast, there will be little reprieve during the nights, with temperatures staying at 35C.

Throughhout the north and central parts of the country, thundery showers are expected through to Wednesday.

A spokespeson for Spain’s state metereological service said they were not dismissing the idea that the temperatures would reach heatwave status.

They said: “It cannot be ruled out that it will end up being classified as a heatwave, especially in the southwest of the Peninsula, although it will not be as extraordinary as that of mid-July.”