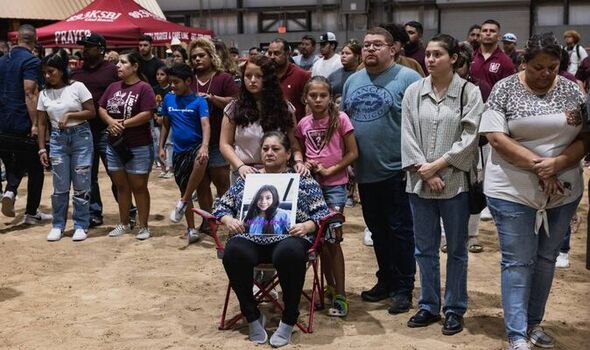 Amerie Jo Garza, 10, was among 19 children slaughtered by Salvador Ramos, 18, during a gun rampage that ended when he was shot dead.

Her father Angel Garza said he discovered Amerie was dead from her best friend, who emerged from the school covered in blood.

He said: “She was just trying to call authorities and I guess he just shot her. How do you look at this girl and shoot her?

“Oh, my baby. How do you shoot my baby? I just want people to know that she died trying to save her classmates.

“She just wanted to save everyone.”

Ramos had bought two AR-15 assault rifles for his birthday and bragged about them on social media, it was said.

He then got into a spat with his grandma, Celia Gonzalez, over a phone bill just moments before shooting her. She is said to be in a critical condition.

Ramos then carried out his atrocity at Robb Elementary School in Uvalde. He shot dead Amerie and 18 of her classmates – all aged under 11 – along with two of their teachers, Irma Garcia, 46, and Eva Mireles, 44.

It was revealed yesterday that one schoolgirl, Miah Cerrillo, 11, had claimed she survived the school shooting by smearing blood on herself and pretending to be dead.

Meanwhile, the Duchess of Sussex made an unannounced visit to a memorial for the victims.

Meghan wore a baseball cap, white T-shirt and jeans, as she layed flowers at crosses left to remember the 19 children and two teachers killed in the attack.

Yesterday, footage emerged showing frantic parents screaming at cops to enter the school and threatening to storm the building to rescue their children.

It has been claimed that officers took 90 minutes to get into the building. One woman shouted: “They’re trapped.”

It is unclear if the footage was from when Ramos was alive or after he had been shot dead by a Border Patrol agent.