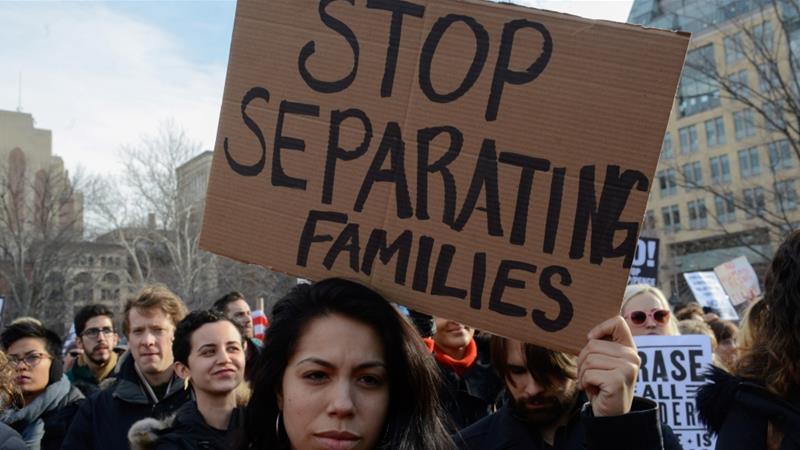 A new lawsuit, filed on Thursday, has accused the US immigration agencies, including Immigration and Customs Enforcement (ICE), of using excessive force, violence and racially profiling workers during a raid at a meatpacking plant last year.

The National Immigration Law Center, Southern Poverty Law Center (SPLC), and the law firm of Sherrard Roe Voigt & Harbison filed the joint lawsuit on behalf of the seven named workers who were arrested with about 100 others at a meatpacking plant in Eastern Tennessee on April 5, 2018 by ICE and Homeland Security Investigations (HSI) agents.

Heavily armed, the officers formed a perimeter around the Bean Station plant and blocked every exit, the lawsuit said.

During the raid, one of the largest in the United States in the last decade, federal agents flooded the building and shouted at workers to freeze, according to the filings.

Helicopters could be heard hovering above the plant while more agents waited outside with “large machine guns pointed at exits”, the groups filing the lawsuit said.

“Some thought they were in a terrorist attack or a shooting situation,” Melissa Keaney, a lawyer at the National Immigration Law Center told reporters on Thursday.

The following day, around 600 children did not go to school, while some workers were too scared to go to work.

According to the lawsuit, 11 of about 100 workers faced criminal charges.

‘I don’t know why these things happen to us’

Martha Pulido, who was one of the workers arrested by ICE during the raid and a plaintiff in the lawsuit, said she saw one officer push a worker to the ground, while another officer punched another worker in the face.

“I was handcuffed without the ability to make a phone call, we were not allowed to speak to each other … and were taken outside,” the Tennessee resident of 20 years said.

Her white colleagues, she said, were not treated in the same way.

“White workers were outside too, but not handcuffed, they were free to move around, some were smoking cigarettes,” she said.

“My items were confiscated, I was fingerprinted and detained for nearly 24 hours,” she added.

“Honestly, I don’t know why these things happen to us. I try to do the right things in life and showed up every day determined to do good work – despite how little we were getting paid.”

ICE agents detained every worker who looked Latino in the plant without regard to citizenship or documentation, a violation of the Equal Protection Clause of the Fifth Amendment, the lawsuit alleges.

The US Constitution protects against government overreach and abusive conduct, the group filing the lawsuit added.

Since taking office, US President Donald Trump has cracked down on undocumented immigrants.

ICE reported a surge in raids at businesses suspected of hiring undocumented immigrants in 2018.

According to figures released by ICE, 779 criminal and 1,525 administrative work site-related arrests were made last year, compared with 139 and 172, respectively, in 2017.

Trump, who has campaigned on promises to remove undocumented immigrants from the country, called a national emergency this month to help free up to $8bn to fund a wall on the US-Mexico border. Several states and groups have since challenged that order.

Almost a year after the Tennessee raid, 40 people of the 100 arrested were released on bond, 12 voluntarily left the country, and about six were deported.

Meanwhile, families in the community continue to deal with the effects of psychological trauma, physical ailments and economic insecurity, following the raid, the groups said.