Exposure to wildfire smoke during last summer’s wildfire season could be associated with thousands of additional coronavirus infections as well as hundreds of deaths, potentially causing an even greater challenge to public health officials in Washington, Oregon and California, a new study has found.

Wildfire smoke contains high levels of the smallest, most dangerous type of soot known as PM 2.5.

Researchers at Harvard University estimated that there were nearly 20,000 extra coronavirus infections and 750 Covid-19 deaths associated with exposure to wildfire smoke between March and December 2020 in the American West. The paper was published Friday in the journal Science Advances.

Exposure to smoke, whether from air pollution or cigarette smoke, is believed to impair the function of white blood cells in the lungs, blunting the body’s immune response. The chemicals in particulate matter can also inflame cells lining the airways and lungs. In both cases, if the body is exposed to a virus in addition to air pollution, the immune response may be slowed and the person may develop a more severe illness than they would have otherwise, researchers say.

The findings build on the well-established connection between air pollution and respiratory-tract infections and conditions such as asthma. But the study is the first to show a statistical link between wildfire smoke and Covid-19 caseloads and deaths.

“These results provide strong evidence that, in many counties, the high levels of PM 2.5 that occurred during the 2020 wildfires substantially exacerbated the health burden of Covid-19,” the authors wrote.

Some places experienced levels of air pollution that were dangerously high. In September 2020, Mono County, Calif., had four days where PM 2.5 levels exceeded 500 micrograms per cubic meter, a “hazardous” level, according to the Environmental Protection Agency. By comparison, on days when wildfires were not burning, the average daily level in the three states was 6 micrograms per cubic meter. 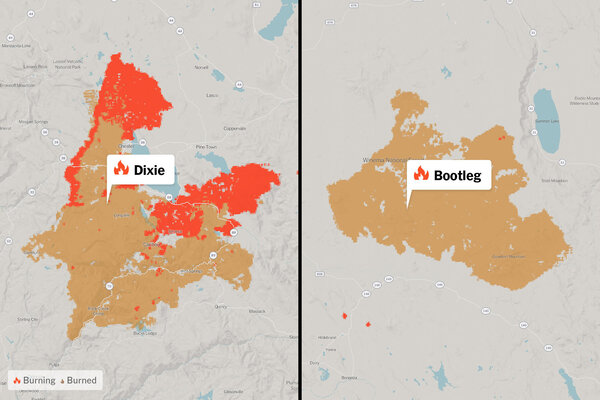 Track Wildfires in the West

To arrive at their conclusion, the researchers used satellite data of smoke plumes from the National Oceanic and Atmospheric Administration to identify the locations and days affected by wildfires. They paired those readings with PM 2.5 data from ground-level air quality monitors in each of the counties and Covid-19 cases and death rates from data compiled by the Centers for Disease Control and Prevention.

Their statistical model accounted for other factors such as weather and the amount of time people were at home, and included a four-week lag to capture the virus’s incubation period as well as the additional time it can take for infected people’s health to deteriorate.

The new study included reported infections, not just deaths, which makes it especially interesting, said John Balmes, a professor of medicine at the University of California, San Francisco, and an expert on the health effects of pollution who was not involved in the research. “It’s one thing for air pollution to be increasing the severity of the coronavirus infection, it’s another for it to be increasing reported cases,” he said.

After decades of tightening air quality regulations, the air in many American cities is cleaner now than it’s been in 50 years. But in the West, increased wildfire smoke threatens to undo those advances, said Loretta Mickley, an atmospheric chemist at Harvard’s John A. Paulson School of Engineering and Applied Sciences and one of the paper’s authors.

As the planet warms, droughts intensify and the West becomes drier, wildfires are starting earlier, growing larger, spreading faster and reaching higher elevations. In California alone, a record 2.5 million acres burned during the 2020 wildfire season, 20 times what had burned the previous year.

“We are really talking about climate change,” said Francesca Dominici, a biostatistician at Harvard’s T.H. Chan School of Public Health and senior author of the paper. “I hope that this is providing an additional piece of evidence for why it’s important to get our act together to combat climate change.”

Wildfire smoke may contribute up to half of the PM 2.5 in some parts of the western United States. It is so far unclear whether wildfire smoke is more or less toxic than smoke from diesel combustion or power plants.

Dr. Dominici noted that the analysis did not include individual patient data or consider other factors such as mask mandates.

Researchers are currently investigating whether fine particulate matter can spread the coronavirus.

The research does not bode well for this year, Dr. Dominici said, as wildfires started early and the pandemic is still raging in the United States, with a Delta variant that tends to be more contagious. She added: “I think the wildfires will have the same, if not worse impact on Covid-19 cases and deaths among the unvaccinated.”