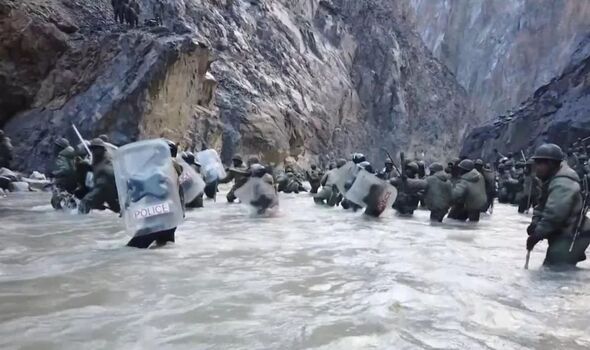 “The missile will add great value to the defence and strengthen national security to a greater extent,” Joshi tweeted, citing its range of 5,400km (3,300 miles) or more.

Ahead of the test, the Bay of Bengal was declared a no-fly zone. Its range covers nearly the whole of China’s mainland.

Fresh tensions were the result of clashes between China and India’s army along their disputed border in Arunachal Pradesh.

Relations between India and China have suffered following clashes in 2020 when 20 Indian soldiers and four Chinese soldiers were killed.

Senior Indian Army officials have recently told The Telegraph that the country has been covering up the true extent of the clashes to avoid causing panic.

Incidents take place in the northern state of Arunachal Pradesh every month, according to the sources.

China had seized the region from India during a war in 1962, before returning it as part of a piece deal.

Beijing has maintained its claim over the territory ever since.

In recent years, Delhi has accused China of becoming more aggressive along the border and attempting to gradually seize strategically important territory.

“Face-offs with the People’s Liberation Army (PLA) have become a common feature along the border in Arunachal Pradesh, particularly in the Yangtse area,” said a senior Indian Army officer.

“They have happened on average two or three times a month, recently, and the incursions have increased in frequency over the last two years.”

The Indian Army followed protocol when they encountered Chinese troops, unfurling banners with messages in mandarin urging them to fall back, although the requests were often ignored, the officer said.

“Sometimes it’s peaceful and sometimes they resist, triggering clashes. Sometimes we have to use stones and rods to push them back,” said the officer.

“We get directions from the top not to discuss these incidents and the reason seems to be political. It seems the Bharatiya Janata Party (BJP) wants to play down the crisis with China,” said the officer.