GDP growth in Asia’s third-largest economy down to 6.6 percent in the third quarter as Narendra Modi seeks re-election. 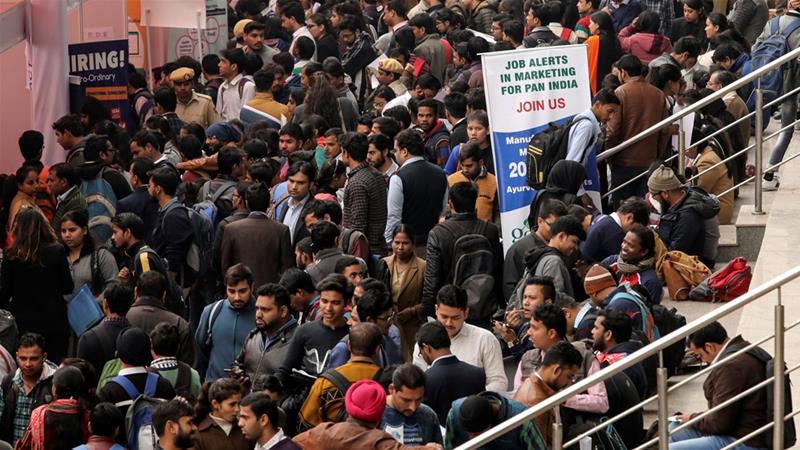 India’s economy slowed further in the latest quarter, official data showed on Thursday, as the world’s largest democracy prepares for a national election and border clashes with rival Pakistan.

The numbers boded poorly for Prime Minister Narendra Modi, who steamrolled to power in 2014 promising to create millions of jobs and spur economic growth, but must call a general election, due in April and May.

“Numbers are disappointing and show growth trajectory slowing down and Modi government cannot do anything between now and elections,” Ashutosh Datar, an independent economist said.

The figures were blamed on weaker consumer spending and a slowdown in investment.

India’s Central Statistics Office also revised down its growth forecasts for the fiscal year ending March to seven percent from an earlier projection of 7.2 percent.

Analysts have said India needs to regularly record growth rates of at least eight percent to create jobs for millions of Indians entering the workforce every year.

Unofficial figures, leaked from the statistics ministry earlier this year, showed India’s unemployment rate at a 45-year high of 6.1 percent.

The crisis came as Modi faces opposition allegations that he has failed to create work for India’s young jobseekers and revitalise the economy.

The dampened numbers also came as New Delhi and Islamabad lock horns in a military crisis that analysts have said could spook foreign investors from making much-needed investments in India.

The nuclear-rivals have shot down each other’s fighter planes in an escalating conflict over the disputed border of Kashmir following weeks of heightened tension.

India attacked what it called a rebel training camp inside Pakistan this week in retaliation for a suicide attack in Kashmir that killed 42 of its paramilitary personnel.

Pakistan responded by sending fighter planes across the de facto border, ending in a dogfight that saw an Indian plane downed and the pilot taken into custody. He is likely to be released on Friday.

“Foreign investors may stay away from India depending on weak growth and ongoing security issues,” Sujan Hajra, economist with the Mumbai-based Anand Rathi securities company, said.

Experts say more interest rate cuts are needed. Late last year, Shaktikanta Das, widely seen as a Modi ally, was appointed governor of the Reserve Bank of India after the previous chief quit, and said he would regularly hold consultations with the government.

The bank cut rates in February to 6.25 percent but experts said more reductions are in the offing.

“There will be clamour for more rate cuts and we may even see RBI cutting the rates by 50 basis points to boost growth,” Hajra said.