In Italy, there have been at least 211,900 confirmed cases of coronavirus according to the Italian Department of Civil Protection. As of Tuesday morning, 29,079 people had died.

Deaths from the COVID-19 epidemic in Italy climbed by 236 on Tuesday, against 195 the day before, the Civil Protection Agency said, while the daily tally of new infections came in at 1,075 against 1,221 on Monday. It was the lowest number of new cases for two months.

The total death toll since the outbreak came to light on February 21 now stands at 29,315 the agency said, one of the highest in the world. The number of confirmed cases amounts to 213,013.

Now, the UK has passed Italy in terms of death toll – making the UK the country with the most officially recorded coronavirus deaths in Europe. 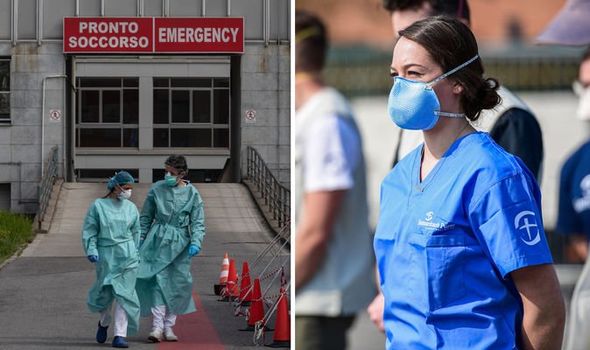 Italy’s true death toll from the disease is probably much higher than is reported by the Civil Protection Agency in its daily bulletins, national statistics agency Istat said in an analysis of nationwide mortalities released on Monday.

The head of Italy’s Civil Protection agency estimated the number of cases could be as much as ten times higher than the current figure.

The Civil Protection Agency said people registered as currently carrying the illness fell to 98,467 from 99,980 on Monday.

There were 1,427 people in intensive care on Tuesday against 1,479 the day before.

Of those originally infected, 85,231 were declared recovered against 82,879 on Monday.

The agency said 1.512 million people had been tested for the virus against 1.480 million the day before, out of a population of around 60 million.

Currently, there are no national figures for care home deaths – as the numbers are collected in regions and different measures are being used across the country.

As it stands, in Italy it is unknown how many deaths may have occurred outside hospital.

Prime Minister Giuseppe Conte announced on Sunday the country’s economy would begin to reopen in stages, while restrictions to movement would be eased very gradually.

Starting from Monday, May 4, Italians will be able to visit relatives, however, must not do so in large numbers.

Also allowed is jogging and other physical activity. Parks will be able to reopen if officials can ensure social distancing measures are adhered to.

In terms of restaurants, businesses can deliver and offer take away food, but customers will not be able to sit in or outside to eat. Stores will reopen on May 18.