The Indian government has blocked ads to Kashmir Reader and Greater Kashmir following the Pulwama attack. 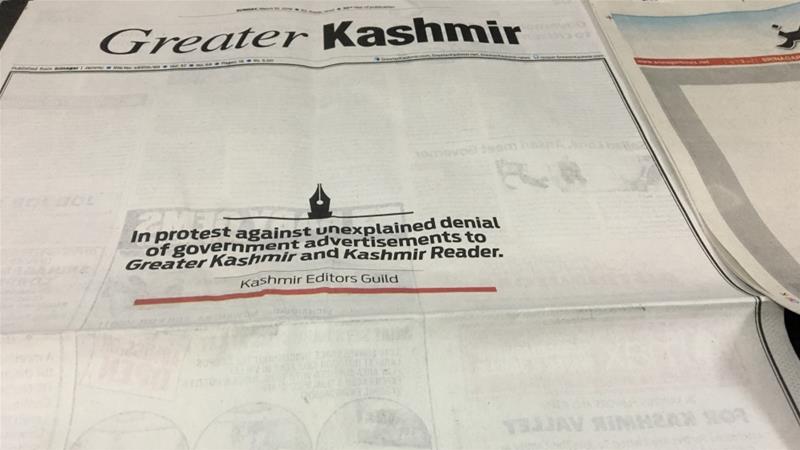 In place of regular news, the papers’ front pages, on Sunday featured a message denouncing the “unexplained denial of government advertisements to Greater Kashmir and Kashmir Reader”. Several journalists, led by the Kashmir Editors’ Guild (KEG), also held a demonstration in the main city of Srinagar, demanding the withdrawal of the ban.

The government action against the two newspapers came two days after a deadly suicide attack in Pulwama on February 14, which brought India and Pakistan to the brink of war.

Newspapers in India are heavily dependent on government advertisements for their survival and the ad-blockade hit both Greater Kashmir and Kashmir Reader. The first was forced to cut its 20-page edition to 12, while the second went from 16 to 12.

“The decision has neither been conveyed formally nor was any reason detailed to the respective organizations, so far,” the KEG said in a statement.

The region has been under the direct rule of the central government of Prime Minister Narendra Modi after a fragile coalition government collapsed in June 2018. Speaking to Al Jazeera on behalf Satya Pal Malik, the state’s appointed governor, Vijay Kumar, his principal adviser, said: “There are always some norms on which certain decisions are made.”

Accusing the Modi establishment of political vendetta, Bashir Manzar, the KEG’s secretary general, told Al Jazeera: “We have decided to fight the deliberate strangulation and subversion of the institution of media in the state.

“We have been asking the government for an explanation but there has been no response in 15 days. Today, we were forced to come up with the blank front pages. That’s all we can do as newspapers,” he said, adding that the government was doing injustice with the readers by blocking the flow of information.

“On the ground, when our reporters go out to report, some are beaten and some [are] hit with pellets. This atmosphere is going on for the past 30 years. It is just killing the messenger,” Manzar said.

Last month’s attack in Pulwama, which killed 42 Indian paramilitary security forces, was the deadliest in the decades-long armed rebellion in Kashmir against Indian rule.

In recent years, the disputed region has witnessed a spike in gun battles between the security forces and the rebels, who either want freedom or a merger with Muslim-majority Pakistan.

Both India and Pakistan claim the whole of Kashmir territory and have fought two of their three wars over it.

In a statement on Sunday, Daniel Bastard, the Asia-Pacific head of the press freedom advocacy group Reporters Without Borders (RSF), denounced the government ban against the two newspapers.

“Amid a surge in tension in the Kashmir valley, it is absolutely vital that newspapers should be able to cover the situation in a completely independent manner, especially as press freedom is an essential condition for defusing tension,” he said.

“The authorities have no right to harass the publications they dislike with the aim of imposing their own version of the facts.”

Speaking to Al Jazeera, Shekhar Gupta, the president of the Editors Guild of India, described the government’s ban as “reprehensible” and called for its immediate withdrawal.

“It is a cheap trick on part of any government to use advertising as a pressure against the media.”

Journalists work under extreme conditions in the region. On January 22, four journalists were shot with pellets by security forces when they were covering a gun battle in southern Kashmir. On January 26, when India marked its Republic Day, accredited Kashmiri reporters were denied entry to an official parade despite the fact that they carried the government-issued passes to the event.

According to the November 2017 report by the International Federation of Journalists, at least 21 journalists have been killed in the conflict – either directly targeted or caught in crossfire in Kashmir.