Tashkent, Uzbekistan – Kyrgyzstan’s Prime Minister Kubatbek Boronov has stepped down after the Central Electoral Commission annulled the results of Sunday’s parliamentary elections in response to accusations of vote-rigging.

Boronov and Dastan Jumabekov, the speaker of the country’s parliament, presented their resignation letters at a meeting of legislators in the capital Bishkek on Tuesday.

At an emergency session on Tuesday, the parliament appointed Sadyr Zhaparov, a founder of the opposition Mekenchil party, which had lost the election, as acting prime minister.

Earlier on Tuesday, Zhaparov had been released by protesters from prison, where he was serving a sentence of 11 years and six months for taking a government official hostage in 2013.

Thousands took to Ala-Too’s square on Monday to protest against electoral fraud. The riots that ensued saw the security services respond with tear gas, rubber bullets and shock grenades against the protesters, killing one 19-year-old and injuring 590.

Later that day, protesters stormed the White House, which hosts the offices of the country’s president and parliament. 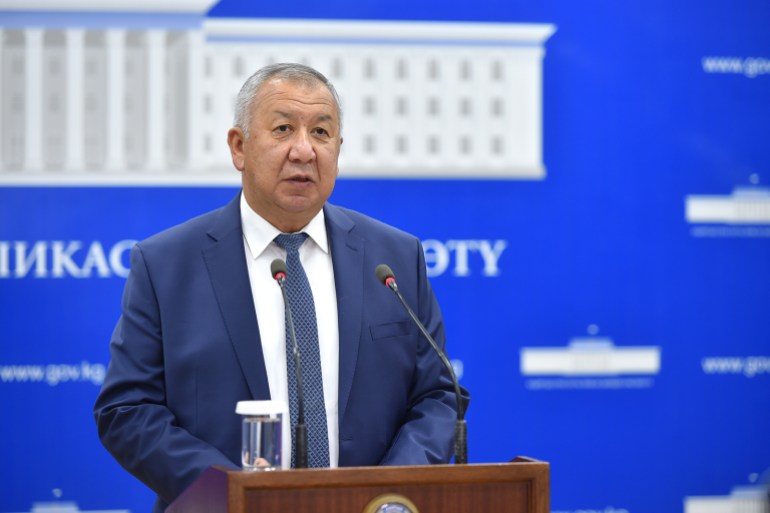 A group of 13 opposition parties on Tuesday formed a Coordinating Council which has temporarily assumed full responsibility for finding a way out of the current deadlock.

The mayors of Bishkek and Osh and the governors of Naryn, Talas, and Issyk-Kul regions have resigned.

While President Sooronbay Jeenbekov – who was allied with Boronov – made an appearance calling for calm, most believe his days in power are numbered.

Kyrgyzstan is no stranger to political upheavals. In the past 15 years, the country faced two revolutions – in 2005 and 2010 – against the corrupt political class and electoral fraud.

The 2010 revolution saw ethnic clashes in the majority Uzbek south of the country in which more than 400 people lost their lives and many thousands were displaced.

The regional divide between north and south has long been the most significant split in Kyrgyz society, with the 2010 revolution seen as orchestrated by the north and imposed on the disenfranchised south.

The new constitution drafted following the upheaval was meant to bring about a parliamentary democracy.

But in 2020, the vision of a democratic Kyrgyzstan, often called the island of democracy in a heavily authoritarian region, seems far-fetched.

“A lot of people felt that this was to be expected considering how the two ruling parties didn’t just win but won so obviously in a manipulated way,” Christopher Schwartz, a Bishkek-based journalist and expert, told Al Jazeera.

“A lot of people are frustrated and disappointed and believe that the authorities have had this coming.”

Schwartz said that the streets of Bishkek were mostly calm, but tense, on Tuesday, and that people are sitting tight and waiting for what is to come.

“There is significantly less violence than in the previous revolution 10 years ago but certainly nobody knows where this is going,” he said.

Hopes were high ahead of the election that the vote might bring a long-awaited change in the country. But none of the opposition parties reached the 7 percent threshold required to enter parliament.

Bruce Pannier, a correspondent with US-funded Radio Free Europe/Radio Liberty (RFE/RL), told Al Jazeera that in Sunday’s election, unlike in other votes, a number of opposition parties put forward younger candidates who have lived most of their lives in the independent nation that followed Soviet rule.

“So there were expectations that things might be moving in a different direction. A lot of opposition parties had pretty charismatic figures,” Pannier said.

“What happened was the worst-case scenario for opposition parties. They should have got at least some seats but the fact that only four out of 16 parties got into parliament showed that nothing was changing for the better and that the country might have made some steps back.”

The election took place against the backdrop of an economic crisis and coronavirus pandemic which hit Kyrgyzstan hard and has triggered a backlash against the government, which is accused of mismanaging the situation.

Allegations of widespread corruption and vote-buying have only added to frustrations.

Aruuke Uran Kyzy, a Kyrgyz expert, told Al Jazeera that the five million som ($63,000) required to participate in the elections was often too high for parties that do not have oligarchs on their lists to afford.

“President Jeenbekov promised to create equal conditions for all the parties and not follow in the mistakes of Kyrgyzstan’s two toppled presidents,” she said.

“But he nevertheless went on to repeat all the mistakes of his predecessors. The political situation at the moment is blurred. We don’t know who is governing the country.” 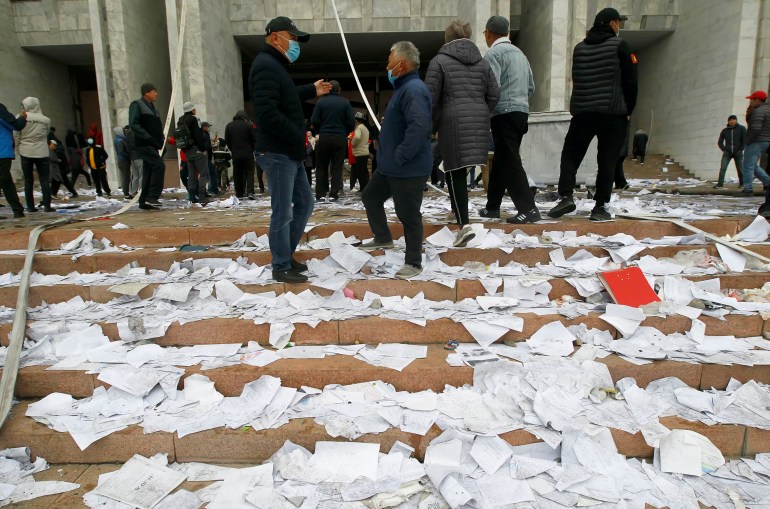 Protesters stormed the White House, which hosts the offices of the country’s president and parliament [Vladimir Pirogov/Reuters]The answer to the question of what is to come next is most likely going to come in the following days.

According to Schwartz, the protests so far have transcended the traditional north-south divide, a situation unprecedented in the country’s 29-year history.

But the divide is still there. The success of the new authorities that will emerge from the current chaos will likely depend on whether they will accommodate voices from the south.

Schwartz said that was is happening in Osh – in Kyrgyzstan’s south – is significant.

“The city council has turned against the mayor. It looks like the north and south rivalry may be transcended by broader concerns, but it’s still there. And it could come back with a vengeance once it becomes clear in which direction the country is going,” Schwartz said.

“The salvation for the country will most certainly lie in the genuine free and fair general election. If that cannot happen, it is unclear what happens after this.”