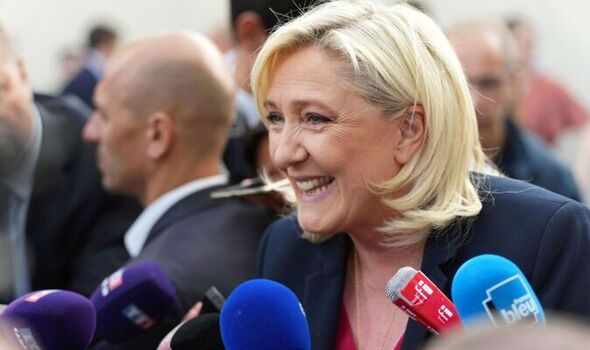 President Emmanuel Macron is on course to lose his absolute majority in the National Assembly as well as control of his reform agenda after the first projections by four pollsters showed Sunday’s election delivering a hung parliament. Mr Macron’s centrist Ensemble! party was set to end up with the most seats followed by the left-wing Nupes bloc headed by the hard left veteran Jean-Luc Melenchon, the polls show.

The threshold for an absolute majority is 289 seats in the lower house.

News agency AFP says Ms Le Pen’s far-right party has also made “major gains” in the election, according to projections.

A hung parliament would likely spark a period of political uncertainty which would require a degree of power-sharing among parties not experienced in France in recent decades.

However, it may result in political paralysis and even repeat elections.

If the outcome is confirmed, Mr Macron’s ability to pursue further reform of the euro zone’s second biggest economy will hinge on his ability to rally moderates outside of his alliance on the right and left behind his legislative agenda.

Mr Macron, 44, became in April the first French president in 20 years to win a second term, but he presides over a deeply disenchanted and divided country where support for populist parties on the right and left has surged.

He had appealed for a strong mandate during a campaign held against the backdrop of a war on Europe’s eastern fringe that has curbed food and energy supplies and sent inflation soaring, eroding household budgets.

Mr Macron said ahead of the second round vote: “Nothing would be worse than adding French disorder to the world’s disorder.”

Mr Melenchon’s Nupes alliance campaigned on freezing the prices of essential goods, lowering the retirement age, capping inheritance and banning companies which pay dividends from firing workers. He also called for disobedience towards the European Union.

Christophe Castaner, one of the ruling party’s most senior lawmakers, derided his economic programme as “stacked with cliches from the Soviet era”.

Initial estimates indicate Nupes has fallen comfortably short of winning a ruling majority, but it had deprived Mr Macron of the same and would become the largest opposition bloc in the Assembly.

If the French president and his allies miss an absolute majority by a wide margin, as the initial projections suggest, they might seek an alliance with the conservative Les Republicains or run a minority government which will have to negotiate laws with other parties on a case-by-case basis.