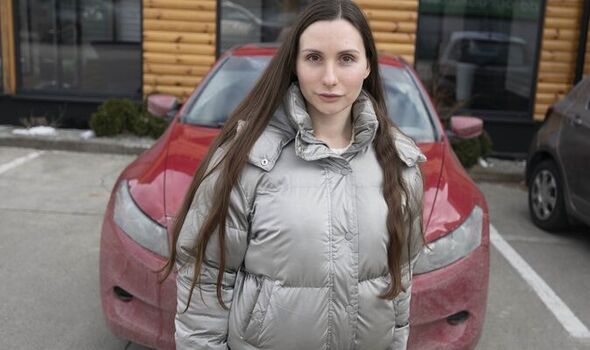 The Kyiv tower block where she lived had emptied as terrified families fled for the border with Russian forces closing in. The neighbouring block had been hit by a Russian missile, and with a column of tanks and armoured vehicles snaking towards the capital, the 32-year-old, her mother and her nan decided it was time to leave. Miss Tkachenko drove past cars crushed by tanks, through Ukrainain military checkpoints and witnessed missiles raining down on an airfield as she drove past.

The property project manager collected her mum, Iryna, and nan Galyna, from their homes in the suburbs of Kyiv and then drove for the border – only sleeping for an hour during the extraordinary journey.

But now Anna, along with her mum Iryna Tkachenko and nan Galyna Kryvulska, are facing an anxious wait to discover if she will be given sanctuary in the UK.

Olena Linyard, Anna’s aunt, flew out from London on Wednesday to meet her loved ones as they crossed into Poland after a mammoth drive through Ukraine, into Slovakia, and then on to Rzeszow.

The family is booked into a small hotel on the outskirts of Rzeszow for the next two nights, though they are now facing a desperate search for more accommodation as the Home Office is warning each application could take up to 72 hours.

And if they are successful, they will then have to drive for four hours to Warsaw.

The Home Office is under increasing pressure to ramp up its response to the “unprecedented” refugee crisis as Western officials warned the number of people fleeing the Russian invasion could reach four million within days.

Some refugees arriving in neighbouring countries such as Poland, Hungary and Romania are suffering from trauma and frostbite.

And Anna revealed she has only slept for three hours since arriving in Poland.

But she refuses to accept the label of a hero despite driving her relatives to safety.

“All of my friends are saying the same thing”, she said.

“The relatives are saying it as well. I was just doing my duty. This is what anybody would do.

“I am worried they would kill me if I went back. My dad says that even humanitarian aid cannot reach them. The Russians will not let it in.”

Speaking from her hotel as she waits for news on the family’s visa application, Anna said: “We managed to fill the tank up with petrol. The queue was about four hours. There were limits as well.

“But I already had some fuel in the tank.

“There were checkpoints, the military and the tanks were all over the place. The Ukrainians were heading to Kyiv to defend the capital.

“When we were driving past Vinnystia, the airport was hit with eight missiles.