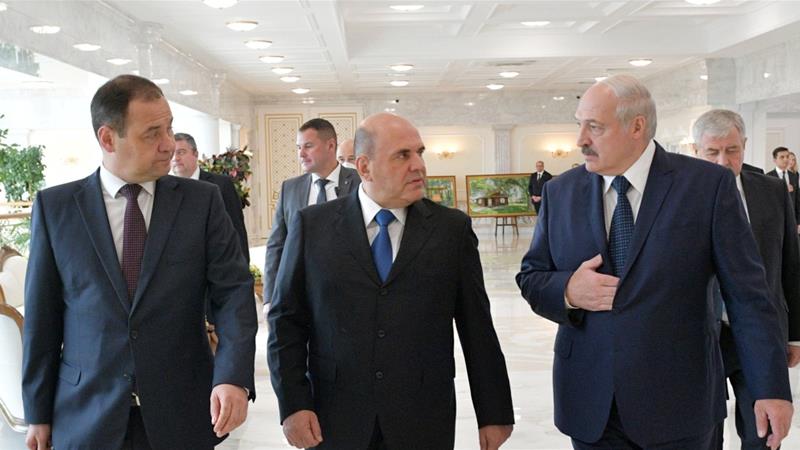 Mishustin made the comments on Thursday during a visit to Belarus, where longtime leader Alexander Lukashenko is under huge pressure from opposition protesters demanding his resignation after a disputed presidential election on August 9.

Meanwhile, in another sign of strengthened ties between Belarus and Russia, Lukashenko entered a growing rift between Western powers and Moscow over the poisoning of Kremlin foe Alexey Navalny.

Lukashenko claimed on Thursday that his security forces had intercepted German calls showing that Navalny’s poisoning had been faked.

Lukashenko told Mishustin in Minsk that a call between Berlin and Warsaw showed that the incident was a “falsification”.

“There was no poisoning of Navalny,” Lukashenko told a poker-faced Mishustin during their televised meeting.

“They did it – I quote – in order to discourage [Russian President Vladimir] Putin from sticking his nose into Belarus’s affairs.”

Lukashenko provided no further details but said he would hand over transcripts to Russia’s security services.

The claim about Navalny could be aimed at currying favour with Moscow, which has voiced support for Lukashenko during the protests.

Navalny’s top aide Leonid Volkov dismissed the claim as ridiculous, accusing the Russian prime minister of being an accomplice to the “attempted murder” by playing along in “this circus”.

Germany said on Wednesday that tests had proven Navalny was poisoned with Novichok, after he fell ill on a plane in Siberia last month and was eventually taken to Berlin for treatment.

Meanwhile, the global chemical weapons agency Organisation for the Prohibition of Chemical Weapons (OPCW) said the poisoning of any individual with a toxic nerve agent would be considered the use of a banned chemical weapon.

Novichok was banned this year by the OPCW.

Navalny, 44, remains in an artificially induced coma but his condition is improving, his German doctors have said.

Lukashenko promoted hardline loyalists to top posts in his security apparatus on Thursday in an effort to strengthen his grip on the former Soviet republic after weeks of mass protests and strikes.

Lukashenko, facing the biggest challenge to his 26-year rule, accompanied the reshuffle with instructions to act tough in the face of what he has repeatedly alleged is foreign aggression.

“Therefore I ask you to take this to the people. They shouldn’t condemn me for any sort of softness. There’s no softness here. The country is working, although many, especially our neighbours, would like us to collapse.”

In recent years the Kremlin has pushed for closer economic and political integration between the ex-Soviet countries but Lukashenko has so far resisted an outright unification.

Lukashenko and Putin are set to meet in Moscow in the next few weeks.