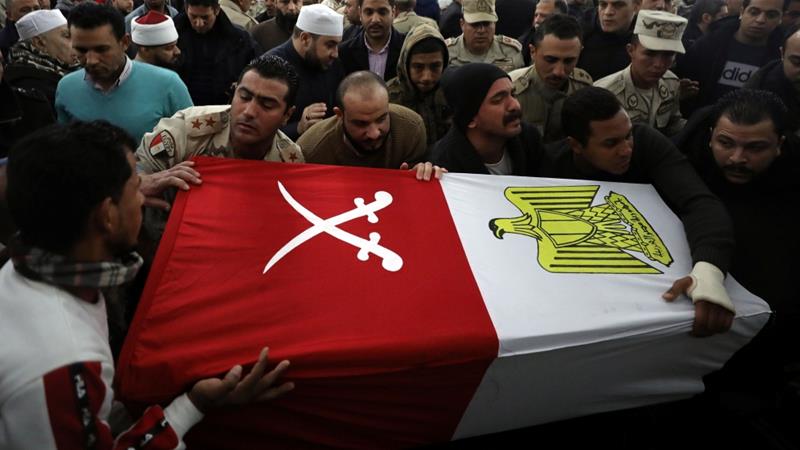 Funeral prayers were held in Cairo and Sharqiya on Sunday to mourn the deaths of an officer and soldiers killed in an attack on Egypt’s military in the Sinai Peninsula.

The Saturday’s attack on the Egyptian army checkpoint in the restive Sinai had caused 15 casualties, while seven of the suspected Islamic State of Iraq and the Levant (ISIL or ISIS) fighters were killed, the military said.

The breakdown of the military casualties was not immediately clear. Two security sources told the Reuters news agency some of the injuries were serious.

The ISIL claimed responsibility for the attack through its Amaq website. The armed group said it killed at least 15 Egyptian troops, revising an earlier figure of 20 dead south of the provincial capital of Arish after clashes with “various kinds of weapons”.

The group did not provide evidence for its claim.

Egypt’s army launched a major operation against the fighters a year ago dubbed Sinai 2018, after an attack in North Sinai killed more than 300 people at a mosque.

The army says more than 550 fighters have been killed in the offensive, which has also targeted other armed groups in Egypt – costing the lives of more than 30 soldiers.

But no independent statistics are available as North Sinai is largely cut off from the media.