The weekend has so far seen fierce winds, downpours and grey skies, with some sunny spells. Wind warnings had been in place for Scotland and Northern Ireland as an Atlantic system hit the UK – bringing strong winds and rain for many.

Now the weather looks to be returning to the sunny skies and high temperatures of late, with the Met Office forecasting highs of up to 27C later this week.

On Twitter the forecasters said: “The #jetstream will remain close to the north of the UK during the coming days, bringing some wet weather here at times.

“Further south, high pressure builds in with temperatures on the rise.

“Regardless of the weather, please remember #StayAlert and #StayHomeSaveLives”. 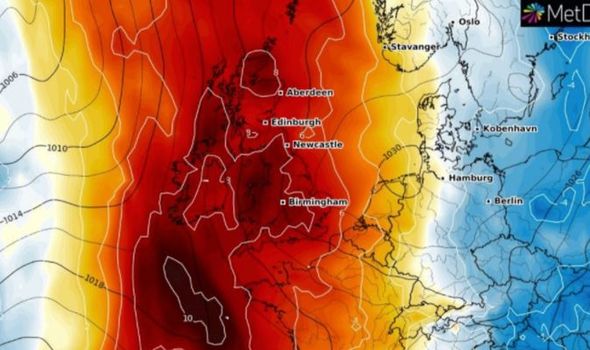 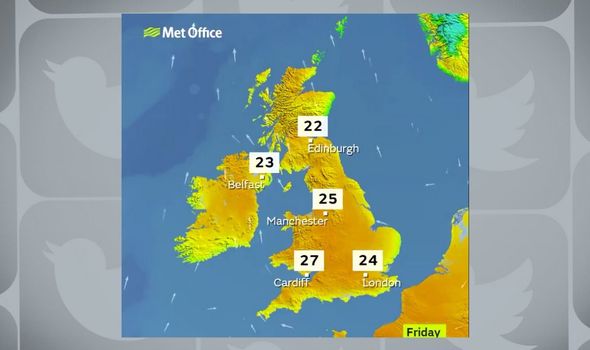 Despite the temptations of the warm weather, Britons are advised to adhere to social distancing guidelines and keep a distance of two metres from anyone else when outside.

Across England, rules now mean trips to the beach, parks and for unlimited exercise are permitted as long as the social distancing restrictions are adhered to.

Speaking at the Downing Street press conference, Matt Hancock asked Brits to be sensible this weekend.

He said: “Let’s not go back to square one. We can all play our part in the national effort.” 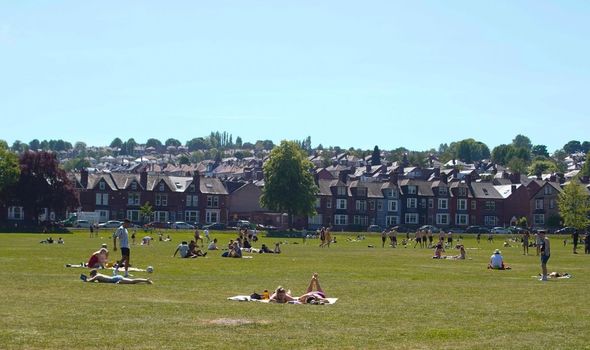 Over the next week, temperatures will rise, with a hot 26C possible for most of the week – including on bank holiday Monday.

Met Office forecaster Alex Deakin said: “All the computer models are in strong agreement that high pressure will sit around for most of next week, certainly bringing most of the south and central Britain fine and sunny weather.”

On Friday, temperatures could rise to 27C with sunny skies for many across the UK.

Forecaster Jo Farrow from Netweather said: “The weather improves through the weekend, settling down, more areas joining in with the dry sunny weather and temperatures begin to rise.”

Netweather says of the bank holiday forecast: “Bank holiday Monday brings the return of fine weather to much of the country, in lighter breezes.

“There’ll be lots of sunshine, but some patchy cloud may ‘bubble-up’ later.

“It becomes warm even very warm in the East and South with top temperatures 19 to 24C, locally 25 or 26C around London.”

Met Office maps show highs of 26C for London on bank holiday Monday, with the mercury staying around 24-26 for the rest of the country throughout the week. 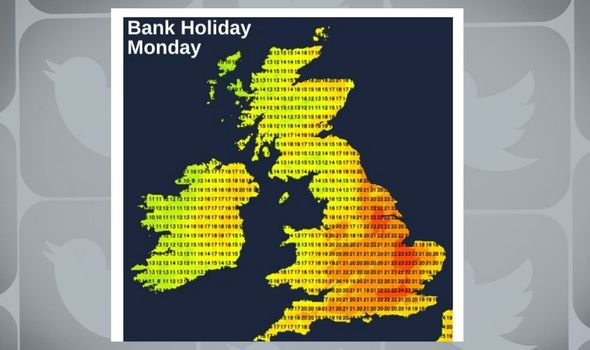 On Friday, highs of 27C could be seen in Wales, as an area of high pressure lingers over the UK.

This is a welcome change from the drizzle and fierce winds which hit from Thursday into Saturday.

Looking further ahead until June 2, the Met Office has said more settled conditions will be felt across the country.

The forecasters said: “The beginning of this period is likely to see a return to more settled conditions, bringing plenty of fine and dry weather, with temperatures recovering to above average.”

This Evening and Tonight

Most areas seeing plentiful sunshine, just patchy cloud in some southeastern areas; turning out warm after the slightly chilly start although some coasts are cooler.

Outlook for Tuesday to Thursday

Some warm sunshine in the south Tuesday and Wednesday, but cooler in the north with cloud and showery rain.

Becoming fine, sunny and even warmer for most on Thursday.