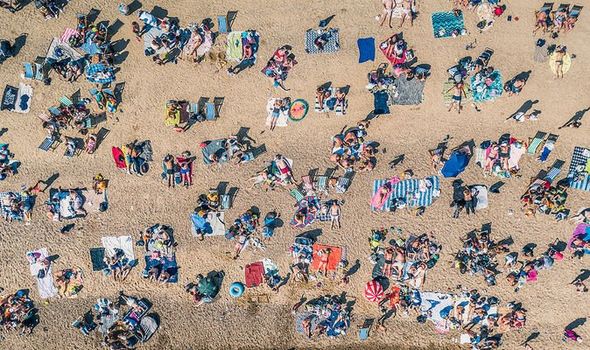 The West Midlands, South-west England, South Wales and further east into Hampshire and the Isle of Wight are forecast to bask in the highest temperatures. The sweltering conditions are expected to last until the end of Thursday, when the country is set to cool off. Temperatures climbed to a high of 88F (31C) yesterday at Heathrow. But today it could hit 91F in some parts. It would beat Sunday to be the hottest day of the year so far.

A tropical blast from the Atlantic is causing the heatwave, encouraging millions to head to the beach. The extreme heat notices were introduced on June 1 into the National Severe Weather Warning Service, part of the Met Office, which highlights the impact of severe conditions.

They are designed to highlight the downsides of heatwaves on health, infrastructure and other services.

One man died at Crookes Valley Park, South Yorkshire, while swimming in a lake. Another fell off rocks at Stair Hole near Lulworth Cove in Devon.

Two teenage swimmers died in Greater Manchester and Oxfordshire, as did a man in his 50s in North Yorkshire.

The county’s fire and rescue manager Paul Hawker said: “No matter how warm the weather is, the water remains cold, which can cause the body to go into shock, making it difficult for the strongest of swimmers.”

Brian Gaze, from The Weather Outlook, said: “The fine weather will probably continue on Thursday.

During the rest of the week the risk of thundery showers increases and it probably turns cooler.”