The Met Office has issued a yellow weather warning for the same area of northern England tomorrow.

Another warning has been given for thunderstorms, this time disrupting the south of England, and will remain in place from 11am to 8pm tomorrow.

The Met Office writes: “Heavy showers and thunderstorms could bring some disruption, especially to transport.”

The weather forecaster adds there is a good chance driving conditions will be affected by spray, standing water or hailstones, as well as possible damage to some buildings and structures as a result of lightning strikes. 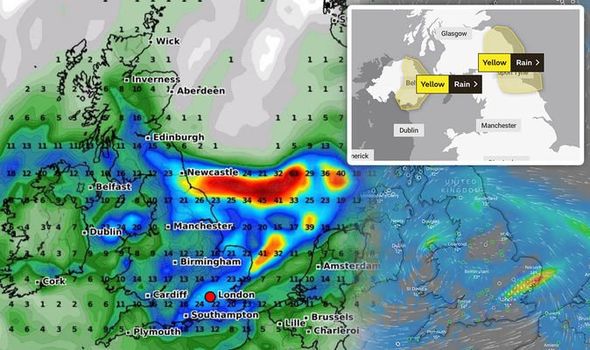 Some short term loss of power is also possible in some areas.

The Met Office states: “Heavy showers and thunderstorms are expected to develop quite quickly later on Friday morning, but peaking during the afternoon for many, before becoming more restricted to the southeast and south coastal counties towards the evening.

“Some places will miss the heavier rain, but other locations could see around 20mm within an hour, and perhaps 30 to 40mm in around 3 hours, sufficient to cause issues on the roads.”

For the rain warning, the Met Office writes: “Rain is likely to persist overnight into Friday, likely bringing some disruption.”

Some homes and businesses will likely become flooded, while transport will almost certainly be affected by the weather.

Interruptions and loss of power and other services is also possible in some parts of the north.

The Met Office writes: “Rain is likely to persist across parts of southeast Scotland and Northeast England overnight into Friday, with widely 10-20mm likely and 30-50mm possible in a few spots where heavy rainfall bands align along the flow.

“The majority of this is expected to fall in the hours running up to midnight on Thursday night.

“The rain is then expected to push southwards from later in the night.”

It comes after the Met Office this afternoon tweeted a weather map, and explained that southern coastal counties in England were experiencing severe winds of 50-60mph and torrential downpours.

Meteorologist Alex Burkill said that “persistent rain” had already hit affected areas, with 44mm falling on St Columb in Cornwall in the six hours to 2pm on Thursday.

Mr Burkill added: “There will be some localised flooding perhaps, but also really quite treacherous driving conditions.”