Weather warnings have been issued for parts of the UK today with dense fog hanging in the air. In the north of England the fog alert space from Newcastle along the east coast down to Nottingham, and is in place until 11am today.

The Met Office said: “Fog will be dense in places with visibility less than 100 metres for some to begin with today.

“Through the course of the morning, fog will tend to slowly lift and thin for many.

“A few places will, however, be unlucky and hang on to mist and fog patches well to the afternoon, most likely parts of the Vale of York.”

A warning is also in place in the south east, covering London along with parts of Essex, Kent, East and West Sussex, Surrey, Hampshire and Hertfordshire. The warning is in place until 10am this morning. 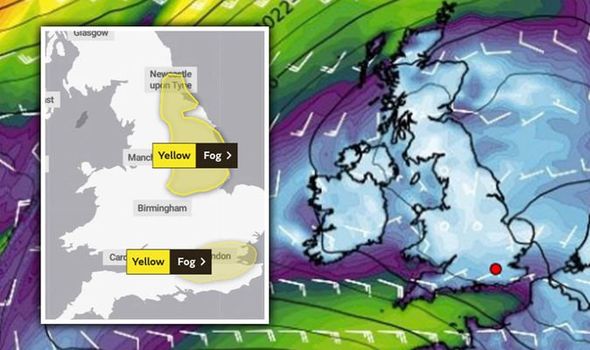 The Met Office said: “Fog and freezing fog patches will be dense in places with visibility less than 100 metres for some to begin with today. Early fog will, however, soon lift and clear this morning.”

The fog is expected to lift into this latter part of this morning, but many will wake up to a misty start today.

The BBC Weather forecast for today reads: “Mainly dry for all areas, with a misty and foggy start for many.

“This will lift in England and Wales to give plenty of sunny spells. Cloudy elsewhere, but a few sunny spells in eastern Scotland.”

While today’s Met Office forecast says: “Early mist and fog patches and low cloud lifting and clearing from most areas, albeit slowly for some with parts of northeastern England perhaps foggy all day. Otherwise fine and dry but windy in the southwest.

“A chilly night for many tonight with some mist and fog patches developing again, especially northeastern and eastern England. Some more widespread cloud and mist developing over southern UK.”

The foggy start to the day comes after last night saw a chilling Bonfire Night in which temperatures were forecast to drop to -3C in some parts.

And the freezing conditions could only get worse, as former BBC and Met Office forecaster John Hammond from WeatherTrending warned of an “early winter”.

BBC’s Matt Taylor said temperatures will plunge by 8C in parts today, adding: “We won’t be bringing in the warm air we saw yesterday across eastern Scotland and eastern England.

“It was 18C in Durham yesterday, but it will be about 10C this afternoon. There will be sunshine to compensate.

“Tonight will be a frosty one across the northern half of the country with fog across the south, and towards the east, and parts of southern Scotland as well.”

But the mercury is expected to lift over this weekend for a small reprieve from the biting cold.

The BBC Weather Monthly outlook says it will be turning warmer through mid-November.

“Initially this will bring chilly north-westerly winds through to Thursday, but a lot of dry and calmer weather, apart from milder rain bands across Scotland.

“From the weekend through the first half of next week, warmer southerly flows will develop as high pressure drifts farther east.

“Similar conditions should last through mid-month, but late November should see high pressure shifting out into the Atlantic to induce some chillier outbreaks from north.”