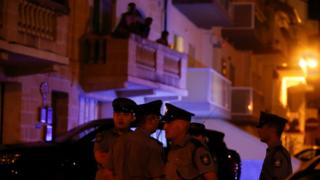 A Maltese man who acted as middleman in the murder of anti-corruption journalist Daphne Caruana Galizia has suffered critical knife wounds on the eve of a court hearing.

Police say Melvin Theuma’s wounds to his neck and abdomen were self-inflicted.

Caruana Galizia died in a bomb attack on her car in 2017.

Former taxi-driver Melvin Theuma was given a presidential pardon and immunity in exchange for his evidence.

Malta’s police commissioner told a press conference on Wednesday there were no signs of a break-in at his home and that the middleman had told them he had wounded himself.

He had suffered wounds to his neck, wrist and ribs and was holding a knife when he was found in his bedroom, Commissioner Angelo Gafa told reporters. He has had surgery and is in a stable condition.

The incident appears to have happened late on Tuesday evening while a 24-hour police guard was outside Melvin Theuma’s home – a third-floor apartment.

Local reports said they went in when his wife returned home after the alarm was raised by his lawyer. The police commissioner said police were originally stationed inside his flat but he had complained about invasion of privacy.

The lead investigator in the case, Keith Arnaud, was among those at the scene and talked to the former taxi driver.

There was incredulity among some opposition figures in Malta that the incident could have happened on the eve of a hearing in which Mr Theuma was due to give evidence.

The case has already brought down Prime Minister Joseph Muscat, and now opposition politicians say the state failed in its duty to protect the key witness.

Why Theuma is significant

His controversial pardon late last year came after he was arrested over a separate anti-money-laundering investigation and then offered police information about the 2017 murder in exchange for immunity from prosecution.

It was his secret recordings and testimony that brought businessman Yorgen Fenech to trial.

The trial, which continued on Wednesday, had been due to hear from Mr Theuma. Mr Fenech denies complicity in the murder as well as other charges. He was arrested on board his luxury yacht as it was leaving Malta last November.

The self-confessed middleman has already given evidence, saying he was paid by the suspect to hire three men accused of carrying out the attack. He has also said that he lives in fear of his life.

How Caruana Galizia was murdered

Two brothers and a friend have been charged with setting off the bomb that killed the anti-corruption blogger in her Peugeot 108 car, near her home in October 2017.

When she died aged 53 she was considered one of Malta’s most fearless journalists.

She had been reporting on allegations surrounding the Panama Papers – a mass of documents leaked in 2016.

The documents revealed that two of Joseph Muscat’s close associates were involved in secret offshore business. One was his chief of staff, Keith Schembri, and another a minister, Konrad Mizzi. There was no evidence of money changing hands.