As they came past us – panting, cajoling, shouting – it was hard to believe what we were seeing.

Here, in broad daylight, were dozens of migrants, manhandling a large inflatable boat down a northern French beach, to get to the seafront in order to to cross the Channel.

Forget the normal rules about subterfuge – this was as brazen and overt as you could possibly get. And what’s more, eight French police officers were watching from about a hundred metres away, and making no effort to get involved. 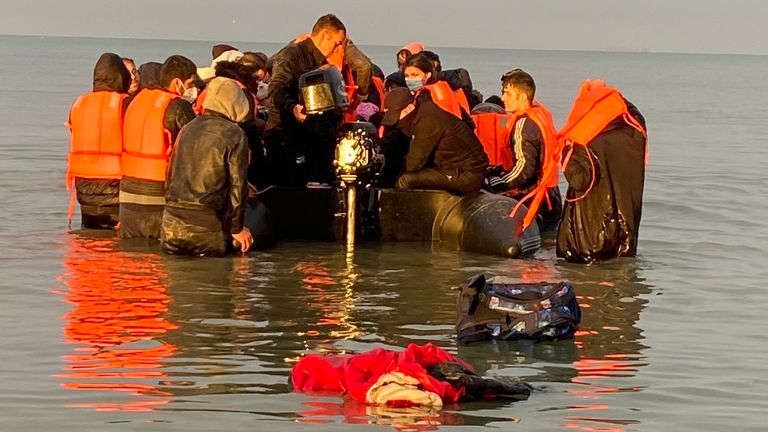 We had arrived here, on a beach near the village of Ambleteuse about half an hour earlier, just to see another, similar boat leaving shore.

It had been overloaded and underpowered, but just about got under way. About 40 people were on board, with a similar number left on the beach.

When we tried to speak to those left behind, they told us they were Iraqi Kurds, but revealed little else, other than an affection for Britain. Or, certainly, for getting to Britain.

One man told us his story of entering the European Union through Belarus, and then passing through Poland and Germany in order to get to France.

He told us he had paid 2,000 in order to arrange his passage to Britain. When I asked if he meant Euros or dollars, he smiled and said “no, pounds…I am thinking like the British now!”

They marched off into the dunes. Scowls told us not to follow them. Which is when we went to speak to the watching French police. 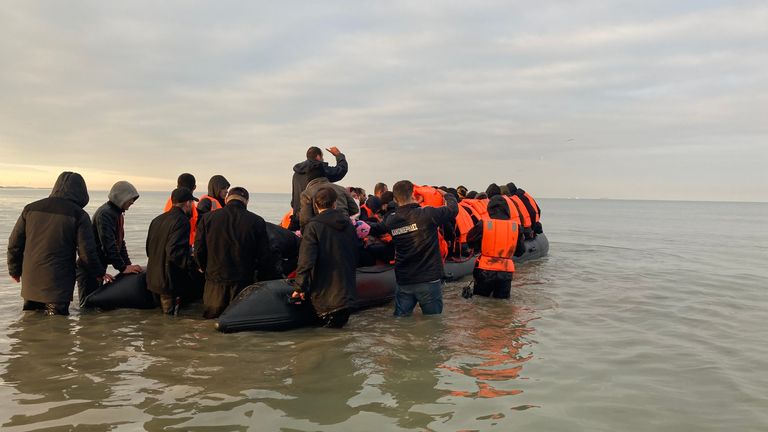 It was not a long walk – maybe 100 metres from the migrants’ dune, to the parked police car. Eight officers stood around it, chatting among themselves.

So why had they done nothing to help, despite being so near?

They were outnumbered, that’s true. But, then again, a cynic might suggest that they had radios, guns, tear gas, truncheons, handcuffs and tactical armour.

As we talked, one of the officers shouted from the top of the dune: “Un autre bateau [another boat]…un autre.”

And that’s when we were reunited with the 40 people left over after the first boat departed.

Here they came, their own boat balanced above their heads, not so much charging down the beach as zig-zagging, stopping every now and then for a break, and then marching on again.

We went over to film this curious caravan of people – and the police stayed where they were.

It took nearly eight minutes for the boat to be taken from the top of the beach to the moment it was pushed into the sea, and the officers watched it all, without moving.

The boat filled up, people jumping on board. Children placed carefully at the front, with mothers and fathers, trying to be calm. 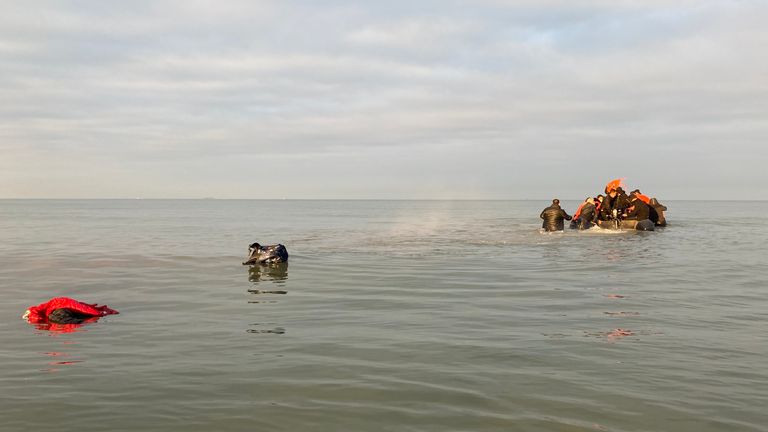 The back of the boat was more boisterous and noisy. It took a while to get the motor going – a 40hp outboard engine to power a boat with forty passengers.

At some point, the police officers did move. While standing in the sea, filming the migrant boat and watching men argue about the engine, we noticed that the officers were now standing in a line, about 100 metres away from us.

For some reason, they were now wearing protective riot helmets and some were brandishing shields. Yet they didn’t approach the boat, and nobody approached the police.

The motor fired up, and the boat slowly edged away. The motor cut off, then was restarted. This happened again and again. With the boat low in the water, some luggage was thrown over the side to reduce the weight.

Then some people jumped off and went back to shore. That made the difference – the boat slowly moving away in the direction of Dover. When we turned away from the water, new police officers had arrived to take over from the previous unit. They, too, were watching on.

Out at sea and we were in the safety of a solid fishing boat. All we could do was watch the first dinghy as it slowly chugged across the water, with a wavering direction.

It was going at a speed of around 5 knots, the boat so laden with people that water was lapping over the edges. Our skipper said the motor would undoubtedly overheat before it reached the UK coast, if it didn’t capsize first.

Overhead the coastguard helicopter circles, checking to see if the dinghy was intact and that all passengers were on board.

We made repeated calls to the French coastguard, alerting them to the vessel. It was not in distress, and the migrants seemed focused on the journey ahead. But these waters were dangerous, and risky to navigate. The Channel is the busiest shipping lane in the world – it is a perilous place for any amateur navigator, let alone someone in charge of an overladen, underpowered dinghy.

After a lengthy wait, the French coastguard appeared on the horizon. We were told there were multiple operations taking place along the French coastline, with at least 20 boats having been spotted launching into the Channel.

With our fuel running low, we headed back towards the coast, and we quickly understood how difficult the day would be for both French and UK maritime patrols. Every few minutes, we came across a new vessel, filled with migrants.

Different sized dinghies carrying varying numbers of people aboard – some with around 40 crammed on board, but none with fewer than 15.

Then something appears in the distance. A bit misshapen and out of place, among the ferries, cargo ships, fishing boats and, yes, dinghies.

It’s a canoe. In the middle of the English Channel, just a few miles from the border line with UK waters. 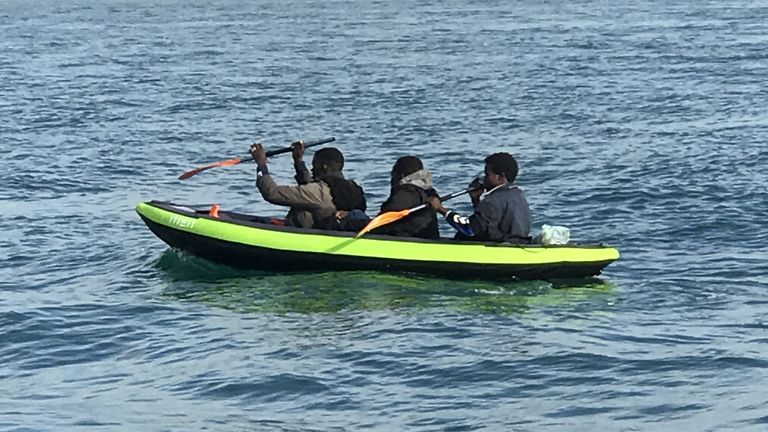 Three men are squeezed in tightly together, with no space for life jackets, and they don’t seem to know which way they are heading. We come near and ask where they’re from. “Sudan,” they shout back.

As we get closer, they turn in circles, confused about how to move in a straight line using their small paddles. It’s clear they have almost no idea how to steer their tiny craft, out here in a shipping line.

This kind of crossing requires no smugglers. Just a sort of blind bravery, coated with desperation.

We check on them. They smile and wave us off. They’ve worked out which way to go – if they keep the sun at their back, then they should land in Dover.

Out here, surrounded by waves and danger, they are relying on their determination to keep them safe.