The nationwide vote is seen as a test for Aung San Suu Kyi and her party National League for Democracy. 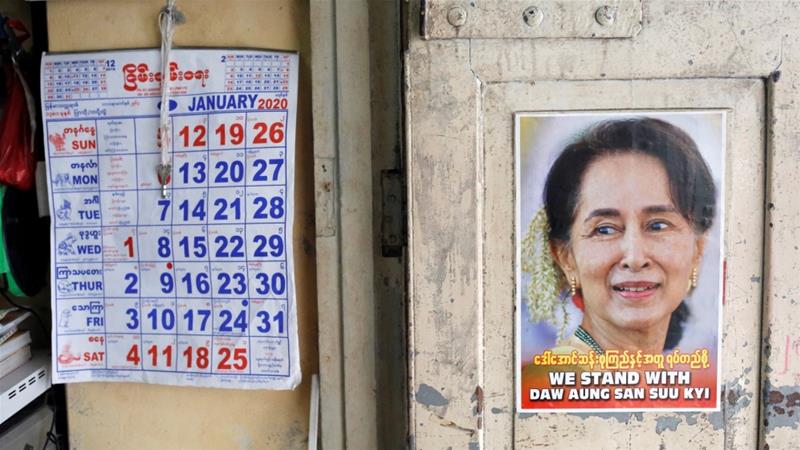 Myanmar will hold its next general election on November 8, the election commission has announced, in a vote seen as a test for the country’s fledgeling democratic government led by Aung San Suu Kyi.

In a statement on Wednesday, Hla Thein, chairman of the union election commission, said a “multi-party general election for the parliament” would be held on that day.

The Myanmar Times said a total of 1,171 national, state and regional seats would be up for grabs in the election, with polling set to take place in all townships, including areas considered conflict zones and self-administered regions.

Analysts see the polls as an important test of Myanmar’s transition away from direct military rule.

Aung San Suu Kyi, a Nobel laureate, won power in a landslide in 2015 that ended decades of military rule. But her administration has come under pressure internationally over a military crackdown that drove hundreds of thousands of Rohingya into Bangladesh in 2017.

She personally appeared at an international tribunal in The Hague to defend the army against the allegations of rape, arson and mass killing in the campaign, which rights groups have said was tantamount to genocide.

But at home, Aung San Suu Kyi remains overwhelmingly popular, although her government has struggled to match sky-high expectations and has had to rebut criticism over escalating fighting with ethnic armed groups and slower-than-expected economic growth.

The army continues to wield enormous power under the constitution, which guarantees its control over key ministries, and 25 percent of seats in parliament.

Monywa Aung Shin, a senior member of the governing National League for Democracy (NLD) party, told Reuters news agency by phone the party would compete in all constituencies across Myanmar and was developing its list of candidates.

“Just like in 2015, we do believe that we will win a landslide,” he told Reuters.

While the NLD is expected to do better than others in the election, analysts say its large majority could be dented.

“There is greater disaffection with the NLD today, especially among minority ethnic communities,” Richard Horsey, a Myanmar-based political analyst with the International Crisis Group, told Reuters.

“But Aung San Suu Kyi remains extremely popular with her base – the Bamar majority in the centre of the country – and it is difficult to see any outcome other than another NLD landslide.”

Matthew Smith, executive director of Fortify Rights, called on Myanmar’s government to ensure the right to vote for hundreds of thousands of displaced civilians across the nation, including in Rakhine, Kachin, Shan and Chin states, where there is continuing unrest.

If not, “this election will not be free and fair”, he wrote on Twitter. “There is time to fix it.”