Nations around the world would need to immediately stop approving new coal-fired power plants and new oil and gas fields and quickly phase out gasoline-powered vehicles if they want to avert the most catastrophic effects of climate change, the world’s leading energy agency said Tuesday.

In a sweeping new report, the International Energy Agency issued a detailed road map of what it would take for the world’s nations to slash carbon dioxide emissions to net zero by 2050. That would very likely keep the average global temperature from increasing 1.5 Celsius above preindustrial levels — the threshold beyond which scientists say the Earth faces irreversible damage.

While academics and environmentalists have made similar recommendations before, this is the first time the International Energy Agency has outlined ways to accomplish such drastic cuts in emissions.

That’s significant, given the fact that the influential agency is not an environmental group but an international organization that advises world capitals on energy policy. Formed after the oil crises of the 1970s, the agency’s reports and forecasts are frequently cited by energy companies and investors as a basis for long-term planning.

Several major economies, including the United States and the European Union, have recently pledged to zero out their emissions responsible for global warming by midcentury. But many world leaders have not yet come to grips with the extraordinary transformation of the global energy system that is required to do so, the agency warned.

“The sheer magnitude of changes needed to get to net zero emissions by 2050 is still not fully understood by many governments and investors,” Fatih Birol, the agency’s executive director, said in an interview.

Net zero emissions doesn’t mean countries would stop emitting carbon dioxide altogether. Instead, they would need to sharply reduce most of the carbon dioxide generated by power plants, factories and vehicles. Any emissions that could not be fully erased would be offset, such as by forests or artificial technologies that can pull carbon dioxide directly out of the atmosphere.

To reach that goal of net zero worldwide by 2050, every nation would need to move much faster and more aggressively away from fossil fuels than they are currently doing, the report found.

For instance, the annual pace of installations for solar panels and wind turbines worldwide would have to quadruple by 2030, the agency said. For the solar industry, that would mean building the equivalent of what is currently the world’s largest solar farm every day for the next decade.

For now, the world remains off course. Last month, the agency warned that global carbon dioxide emissions were expected to rise at their second-fastest pace ever in 2021 as countries recovered from the ravages of the coronavirus pandemic and global coal burning neared a high, led by a surge of industrial activity in Asia.

“We’re seeing more governments around the world make net-zero pledges, which is very good news,” Mr. Birol said. “But there’s still a huge gap between the rhetoric and the reality.” 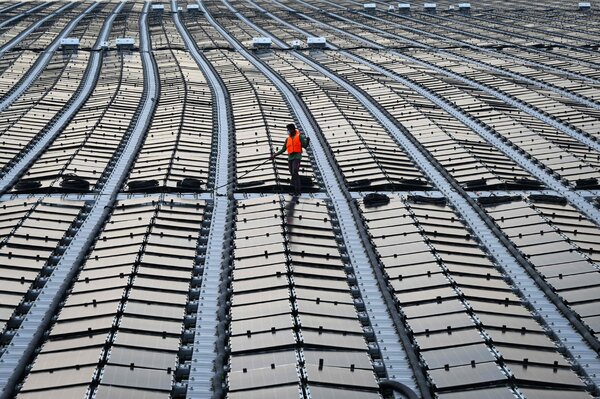 President Biden has made climate action a top priority of his administration and is pushing for an aggressive pivot away from fossil fuels at home and abroad. But his own pledge to cut U.S. greenhouse gases at least 50 percent below 2005 levels by the end of this decade faces significant political obstacles. And at a virtual summit of 40 world leaders that Mr. Biden hosted last month, Japan, Canada and Britain joined the European Union in committing to steeper cuts but China, India and Russia did not.

China still has plans for dozens of new coal-fired power plants, although President Xi Jinping said his country would “strictly limit increasing coal consumption” in the next five years. And companies in the United States and Canada are still targeting new oil and gas fields for development.

The unevenness in global action comes even as scientists warn that the damages from rising temperatures are already reverberating around the globe. A report by the Environmental Protection Agency published last week found that in the United States, wildfires are now starting earlier in the year, heat waves are more frequent and flooding is more common.

If the world’s governments want to change course quickly, the International Energy Agency has essentially offered a step-by-step guide for how they might do so. The agency sketched out one potential timetable:

This year, nations would stop approving new coal plants unless they are outfitted with carbon capture technology to trap and bury their emissions underground. Nations would also stop approving the development of new oil and gas fields beyond those already committed.

By 2025, governments worldwide would start banning the sale of new oil and gas furnaces to heat buildings, shifting instead to cleaner electric heat pumps.

By 2030, electric vehicles would make up 60 percent of new car sales globally, up from just 5 percent today. By 2035, automakers would stop selling new gasoline- or diesel-fueled passenger vehicles. By 2050, virtually all cars on the roads worldwide either run on batteries or hydrogen.

By 2035, the world’s advanced economies would zero out emissions from power plants, shifting away from emitting coal and gas plants to technologies like wind, solar, nuclear or carbon capture. By 2040, all of the world’s remaining coal-fired power plants are closed or retrofitted with carbon capture technology.

In 2035, more than half of new heavy trucks would be electric. By 2040, roughly half of all air travel worldwide would be fueled by cleaner alternatives to jet fuel, such as sustainable biofuels or hydrogen.

The American Petroleum Institute, an oil and gas industry trade group, said it agreed with the goal of a lower carbon future but still saw a role for oil and gas going forward. “Any pathway to net zero must include the continued use of natural gas and oil, which will remain crucial to displacing coal in developing nations and enabling renewable energy,” said Stephen Comstock, the institute’s vice president of corporate policy.

The International Energy Agency warned that an energy transformation on the scale necessary would require “unprecedented” global cooperation, with wealthier nations helping poorer countries that lack the technological expertise or investment capital to decarbonize.

It would also require a crash research program to improve clean energy technologies.

The world can make enormous strides in cutting emissions over the next decade by deploying technologies that are already widely used, such as wind turbines, solar panels and electric vehicles. But roughly half the emissions cuts by 2050 would come from technologies that are still in the demonstration or prototype stage, the report said, such as cleaner hydrogen fuels for steel plants, advanced batteries to juggle wind and solar output and devices to pull carbon dioxide out of the atmosphere.

Governments will have to pay careful attention to the geopolitical upheaval that could accompany a rapid shift to clean energy, the agency said. For instance, mining for critical metals such as cobalt or copper would grow sevenfold over the next decade. The sharp decline in oil and gas production worldwide would likely mean that low-cost oil producers in places like the Middle East would assume a dominant share of the remaining market.

Other challenges abound. While a push for clean energy could create some 30 million new jobs globally, another 5 million people in fossil-fuel industries could find themselves out of work. And, today, more than 785 million people worldwide currently have no access to electricity, and the agency warned that a shift away from fossil fuels shouldn’t leave them behind.

“This isn’t too far out of line with what other academic reports have said, but it’s important that this is the International Energy Agency saying this,” said David Victor, a climate expert at the University of California, San Diego, who reviewed the report before its publication. “Companies or governments might come in and say they disagree with the specifics of what needs to happen, but this report essentially serves as a starting point for those discussions.”

The agency concluded that limiting global warming to 1.5 degrees Celsius remains technically and economically feasible, but there is little margin for error or delay. “Making net-zero emissions a reality,” the report concluded, “hinges on a singular, unwavering focus from all governments — working together with one another, and with businesses, investors and citizens.”