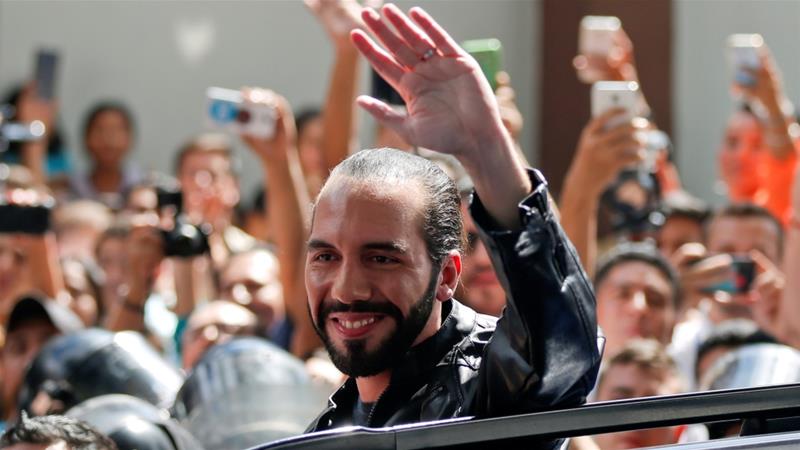 “At this moment, we can announce with complete certainty that we have won the presidency of El Salvador in the first round,” the 37-year-old, a former San Salvador mayor, told a press conference on Sunday evening.

“We made history,” added Bukele, calling supporters to celebrate in Morazan Plaza in San Salvador’s historic centre, one of the flagship revitalisation projects during his tenure as mayor of the capital.

With 99 percent of votes counted, Bukele was leading the race with 53 percent, exceeding the 50 percent threshold required to avoid a runoff.

His main rival, Carlos Calleja, of the conservative Nation Republican Alliance (ARENA), was second with 31.8 percent.

The new president will take office on June 1 for a five-year term.

Raquel Caballero, the human rights ombudswoman, told Al Jazeera that voting was smooth. “In general terms, the electoral process was carried out without incident,” she said.

But Julio Olivo Granadino, the president of the electoral commission, told reporters that a press conference held by Bukele two hours before the closing of the polls, in which he urged voters to cast their ballots, marked a “clear” election campaigning violation.

Bukele, previously a member of the left-wing FMLN, ran on a ticket with the right-wing GANA, an offshoot of ARENA.

In the lead-up to the vote, which was held against a backdrop of public disillusionment following several high-level corruption scandals, Bukele repeatedly lambasted the political class as corrupt and thieving.

Three out of four of the country’s most recent presidents – from ARENA and the FMLN – have been investigated for embezzling millions from public coffers. Bukele also faces an investigation for possible tax evasion.

Bukele proposed setting up an internationally backed anti-impunity mission to combat corruption and promised voters he would create a “compact and efficient” government that used “big data” to solve problems.

For his part, Calleja, a United States-educated business executive whose family owns El Salvador’s largest supermarket chain, campaigned on a platform of employment creation. A newcomer to politics, Calleja pledged to generate 300,000 jobs and run a government that interacted closely with the people.

“The most important [issue] is the insecurity,” says Mario Leiba, 50, a long-time ARENA supporter who served in the army during the country’s 12-year civil war that ended in 1992.

“I don’t see a concrete response – they all promise the same thing. The question is whether they will fulfill (their promises).”

Last year, the country’s murder rate dropped to 50 per 100,000 people, the lowest rate since a truce between rival gangs – covertly facilitated by the government – broke down in 2013. But while homicide numbers have dipped, reports of missing people have been on the rise in recent years.

In addition to the dire security situation, the new government will inherit an ailing economy and an increasingly hostile attitude from Washington.

US President Donald Trump has threatened to cut aid to El Salvador, as well as neighbouring Honduras and Guatemala, over a steady outpouring of migrants heading north, which he says the region’s governments have failed to contain.

A majority of Salvadorans believe their country’s relationship with the US is deteriorating, according to a recent poll by the Centre for Citizen Studies.

“The country is considered one of the most dangerous [in the world]. The government needs to deal with this,” added Gonzalez.

During his time as San Salvador’s mayor from 2015 to 2018, Bukele captured international attention as a millennial leader with a knack for social media and a plan to revitalise a city notorious for its gang violence.

His mayorship was marked by high approval ratings and is mostly remembered for remodelling public spaces in the historic city centre.

“It would be good if he [Bukele] continues the same pattern he had as mayor,” said Gonzalez, who voted for Bukele. “Because he worked maybe not 100 percent but we saw [results from] what he did.”

For another Bukele supporter, 29-year-old Camila Portillo, the new government’s top priorities should include “eradicating corruption” and “being more inclusive of vulnerable communities”.

“He presents himself as different from the traditional,” said Artiga.

But without an established party, a Bukele administration would face steep challenges.

ARENA holds the largest bloc in the legislature, with 37 seats. It is followed by the FMLN, which has 23.

GANA and another smaller party Bukele allied with together hold 11 seats, while other parties control a total of 13 seats.

“He needs to strengthen his party,” Artiga said of Bukele’s likely political priority to seek gains in the 2021 legislative elections. “The only way to do that is by adopting measures with some popularity.”

“In this sense, it could be that he continues with many of the [FMLN] programmes. But as he has promised a train along the coast, four new hospitals, a new airport – he will have to do some of that,” Artiga said.

“The problem is whether he will be able to do it given the fiscal restrictions.”

In addition to a stagnant economy, El Salvador struggles with steep public debt at 70 percent of gross domestic product (GDP), according to the World Bank.

María Teresa Martinez, a 65-year-old Bukele supporter, said she was concerned about her eight grandchildren’s future.

“There’s no work for the youth, the new government needs to address this. When there’s work, there’s more development.”