Russian leader continues to issue warnings saying he doesn’t want a missile crisis but ready to act if provoked by US. 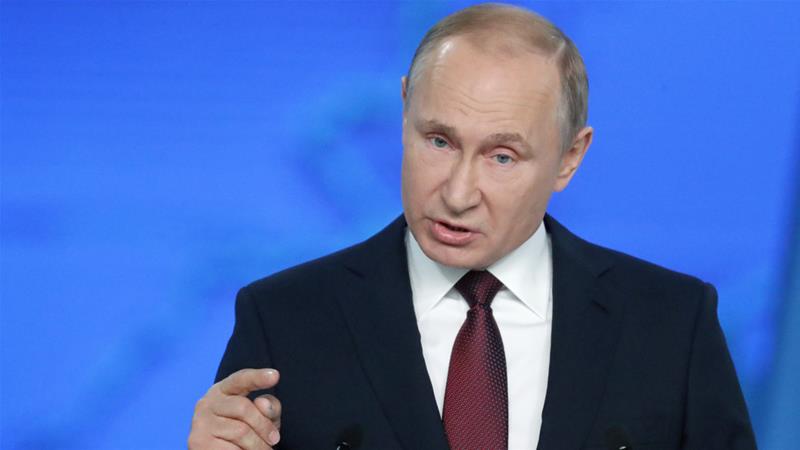 Russia’s military is ready for its own “Cuban Missile Crisis” if the United States is foolish enough to want one and Moscow has the edge when it comes to a nuclear-first attack, President Vladimir Putin said.

Putin’s comments, made to Russian media late on Wednesday, follow his warning that Moscow would match any US move to deploy new missiles closer to Russia by targeting Western capitals with faster missiles of its own.

The Cuban Missile Crisis erupted in 1962 when Moscow responded to a US missile deployment in Turkey by sending ballistic missiles to Cuba – 150km from the US – sparking a standoff that brought the world to the brink of nuclear war.

More than five decades on, tensions are rising again over Russian fears the US might deploy intermediate-range nuclear missiles in Europe as a landmark Cold War-era arms control treaty unravels.

Relations between Moscow and Washington were strained, Putin said, but tensions were not yet comparable to those of the Cuban Missile Crisis.

“They [tensions] are not a reason to ratchet up confrontation to the levels of the Cuban Missile Crisis in the 1960s. In any case, that’s not what we want,” said Russia’s president. “[But] if someone wants that, well OK they are welcome.”

Putin said Russia could deploy hypersonic missiles on ships and submarines, which could lurk outside US territorial waters if Washington moved to deploy new nuclear weapons in Europe.

“[We’re talking about] naval delivery vehicles: submarines or surface ships. And we can put them, given the speed and range [of our missiles] … in neutral waters. Plus they are not stationary, they move and they will have to find them,” Putin said, according to a Kremlin transcript.

The US State Department dismissed Putin’s earlier warning as propaganda, saying it was designed to divert attention from what Washington alleges was Moscow’s violations of the Intermediate-range Nuclear Forces (INF) Treaty.

The pact, which banned Russia and the US from stationing short- and intermediate-range, land-based missiles in Europe, is in its death throes, raising the prospect of a new arms race.

Putin has said he does not want an arms race with the US but he would have no choice but to act if Washington deployed new missiles in Europe, some of which he says would be able to attack Moscow within 10-12 minutes.

Putin said his naval response to such a move would mean Russia could attack the US faster than US missiles could hit Moscow.

“It [the calculation] would not be in their favour, at least as things stand today. That’s for sure,” said Putin.

Despite Putin’s boasts of military prowess, Russia’s armed forces are not as capable or modern as its annual Red Square military parades suggest, Western diplomats and military experts say.

Putin has long projected an image of military might to strengthen his and Moscow’s image at home and abroad, but Russia is overhauling its military far more slowly than China, observers say.

“Moscow’s problems mean its ability to project conventional military force – something it is doing in Syria and has done in Ukraine – is not as great as the Kremlin would have the world believe,” said one Western official with knowledge of Russia’s military.

Moscow has a shortage of modern factories and skilled labour, and does not have the available financial resources needed to reverse decades of post-Soviet decline as quickly as it wants, Russian officials and military analysts say.

In his speech on Wednesday, Putin did not mention the navy’s problems.

The programme to build Russia’s most advanced stealth frigate, the Admiral Gorshkov-class, has been paralysed by sanctions. Russia hopes to add 14 more such ships to its navy but has no engines for 12 of those vessels.

The air force has also been an issue. Moscow had initially been expected to procure about 150 of the fifth-generation Su-57 stealth fighter jet, but defence industry and government officials say they now expect just one plane, the first serially produced aircraft, this year. A further 14 may follow.

Analysts say the costs of mass-producing the new fighter jet are simply beyond Russia. Plans for Russia’s super tank have also foundered.

That does not mean Russia’s military is not a force to be reckoned with. Some of its hardware, such as its S-400 air defence systems, are world class.

But Russia’s air force and army, like its navy, are experiencing rearmament problems. Its new stealth fighter first took to the air more than nine years ago and a super tank made its Red Square debut almost four years ago. Neither is due to be deployed in large numbers soon, government officials say.

Richard Connolly, a Russia specialist at the University of Birmingham, said Moscow’s military might should not be underestimated, but Russia was still suffering from the legacy of an economic crisis that followed the Soviet Union’s collapse, hitting state arms orders and the military-industrial complex.

“It’s not as easy as simply saying, ‘Right, we’ve got the money so go and make it happen’, because a lot of the shipyards have rusted,” Connolly said.