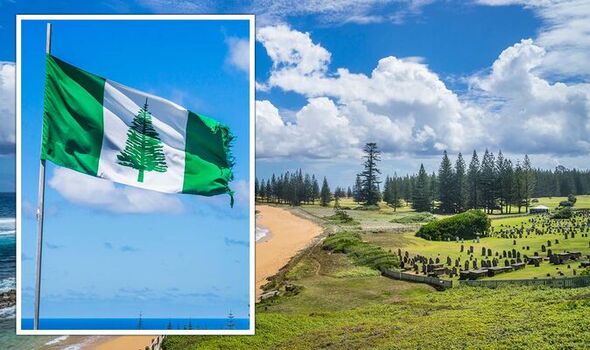 Campaigners say that Norfolk Island, located between Australia and New Zealand, has been denied the freedom to run its own affairs and decide its future.

Conservative MP Andrew Rosindell, who chairs the United Kingdom-Norfolk Island Friendship Group, fears it is being forced “into becoming part of Australia”.

Many of the inhabitants are descendants of the mutineers from HMS Bounty who were granted permission by Queen Victoria to settle on the island, and unrest is once again stirring.

The island became a territory of Australia in 1913 and it was granted limited self-government in 1979. But in 2015 its legislative assembly was abolished and replaced with an administrator and a regional council.

Today, the Norfolk Island People for Democracy Group is pushing for the “right to self-determination”. It claims the islanders are a “distinct people” who have been stripped of their democracy.

He said: “Norfolk Islanders ran their own domestic affairs for many years, preserving a unique English and Polynesian heritage dating back to the mutiny on the Bounty. But [the] Australian government re-colonised Norfolk and abolished its democracy…

“They have complained to the UN and want Britain to support them against this extinction of their democratic rights”.

Mr Rosindell said the island, which has a population of more than 1,700, is a “little paradise” but described the situation as “horrendous”.

He urged the Australian Government to reach an agreement with the islanders, saying: “I’ve been over to Norfolk Island twice. [I] know the people there, I know the issues, I understand where they are coming from and it’s deeply sad. It should never have happened.

“Although I don’t want in any way to harm Australia I do think this is very solvable. It just needs the Australian Government in Canberra to take a fresh look at this and model a system on what we do with our territories.”

Mr Rosindell suggested Norfolk Island could have a similar relationship with Australia as the Falkland Islands or the Isle of Man have with the United Kingdom.

Other options could include breaking away from Australia and forging a new relationship with New Zealand or even becoming a British Overseas Territory.

Describing the islanders’ sense of kinship with Britain, he said: “They are very British in their mentality. They sing God Save the Queen, they fly the union jack there.

“They are very British in every sense and all they ask for is they have the same rights as every other colony.”

The Queen visited the island in 1974 and in 2020 she sent a message  noting the “role and contribution of the Norfolk Island people during World War II”.

Mr Rosindell said there was concern that if Australia became a republic the island would lose its link with the monarchy. He said he would welcome the islanders “with open arms” if they decided to become a British territory but he did not want to “tell them what they should do”.