Palestinians send mediators’ response to the US plan, which endorses Israel annexing parts of the occupied West Bank. 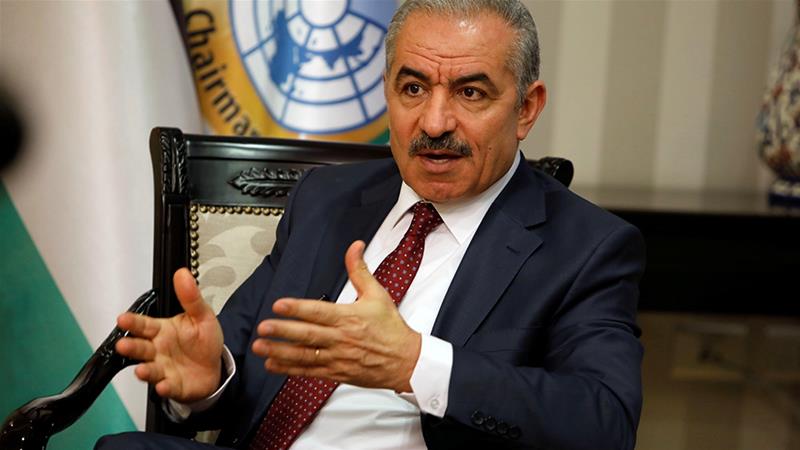 The Palestinian Authority (PA) says it has sent international mediators a counterproposal to United States President Donald Trump’s Middle East plan, proposing the establishment of a demilitarised and sovereign Palestinian state in the occupied West Bank, East Jerusalem and Gaza.

In a news conference with foreign journalists on Tuesday, Palestinian Prime Minister Mohammad Shtayyeh said the proposal was submitted to the Quartet, an international body made up of the United Nations, the European Union, the US and Russia that is tasked with mediating peace talks between Israel and the Palestinians.

The Palestinian proposal seeks to create a “sovereign Palestinian state, independent and demilitarised”, with East Jerusalem as its capital. It also leaves the door open to border modifications between the proposed state and Israel, as well as exchanges of land equal “in size and volume and in value – one to one”, according to Shtayyeh.

No other details were immediately available.

The Palestinian proposal came as a response to Trump’s controversial plan that gives a green light for Israel to annex large swaths of the occupied West Bank, including illegal settlements, and the Jordan Valley.

Unveiled in late January, Trump’s plan proposed the establishment of a demilitarised Palestinian state on the remaining patchwork of disjointed parts of the Palestinian territories without East Jerusalem, which Palestinians want as the capital of their state.

The Palestinians rejected Trump’s plan as utterly biased in favour of Israel and threatened to withdraw from the Oslo Accords.

The Palestinian leadership had already cut ties with the Trump administration in 2017 over its pro-Israel stance, including its recognition of Jerusalem as the capital of Israel and the relocation of the US embassy there in May 2018.

The planned Israeli annexation would deprive Palestinians of key agricultural land and water resources, especially in the Jordan Valley region. It would also effectively kill the two-state solution to the Arab-Israeli conflict that was based on the idea of land for peace.

Shtayyeh warned that if the Israeli government moved ahead with the planned annexation, “the Palestinian government will issue an announcement to establish a constitution for the [intended] state and establish a founding council” to function in the place of Parliament.

Wasel Abu Yousef, senior leader and member of the executive committee of the Palestine Liberation Organization (PLO), described Tuesday’s announcement as “part of several steps the Palestinian leadership is working on, such as achieving Palestinian unity, boycotting Israeli products and pressing ahead with war crimes charges against Israel at the International Criminal Court ( ICC) for its war on Gaza in 2014.”

These efforts, he told Al Jazeera, were aimed at countering both Israeli and US policies designed to undermine the Palestinian “right” to an independent state and the right of return of Palestinian refugees who were forcibly expelled from their homes and towns when Israel was founded in 1948.

Abu Yousef said the Palestinian leadership has no other choice but to confront the US and Israeli objectives to deny Palestinians their rights and reject the current “peace” proposals that fall far short of the Palestinians’ demands.

“No Palestinian leader can agree to the American and Israeli conditions to give up the right or return of Palestinian refugees, agreeing to the annexation of Jerusalem or allowing Israel to annex parts of the West Bank where it had built its illegal Jewish settlements,” he said.