BBC Weather: Warm air to hit in the south

According to NetWeather, a plume of warm and humid air has been pulled north towards southern Britain, causing the elevation in the mercury. In turn, this will see large swathes of England feeling warm and staying dry – but a band of rain will bring a colder front across northern areas, bringing downpours across Scotland. But like all weather systems, it will stay on the move, heading south by tomorrow. Senior forecaster at NetWeather, Nick Finnis, said: “The cold front looks to continue south towards southern areas on Tuesday, while showers also try to push up from the south.

“There is some uncertainty as to how much rain or showers will linger across the south into mid-week, with GFS showing high pressure building in from the Atlantic at the same time – which could prevent much rain or showery activity developing.”

But he did not rule out some occasional showers across southern England by mid-week, with good early indicators that the middle of the month may remain dry and settled.

While today’s surprisingly summer-like temperatures are only short-lived, the mercury will remain pleasantly warm until Wednesday, when highs of 21C will be felt inland in the south east more precisely. 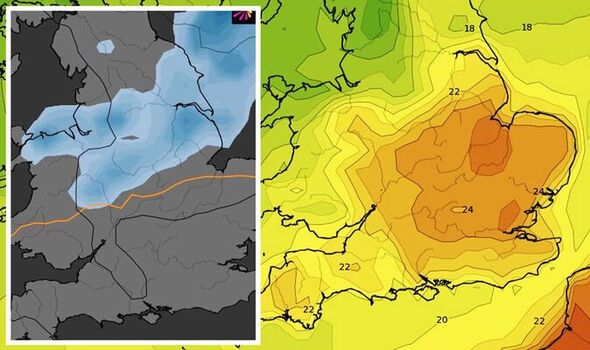 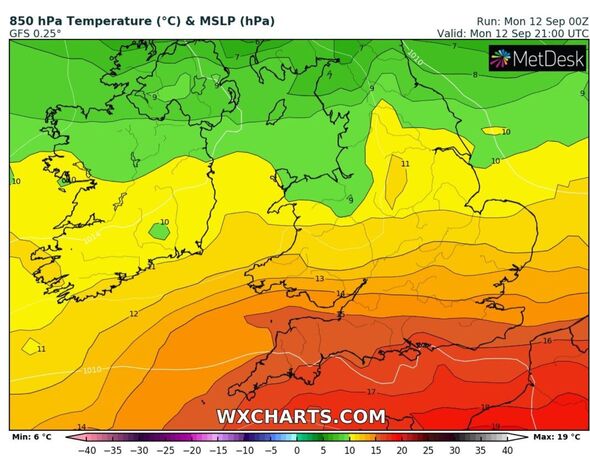 Looking towards the rest of the month, WX Charts, an interactive weather model, shows a large band of rain moving across the UK on September 28.

However, largely dry conditions are to be expected beforehand.

According to the Met Office, the remainder of the month will only have risks of scattered showers, which may only be heavy in some places.

The long range forecast from the end of this week until September 25 says: “This period will start with generally dry weather, sunny spells, and some isolated showers. 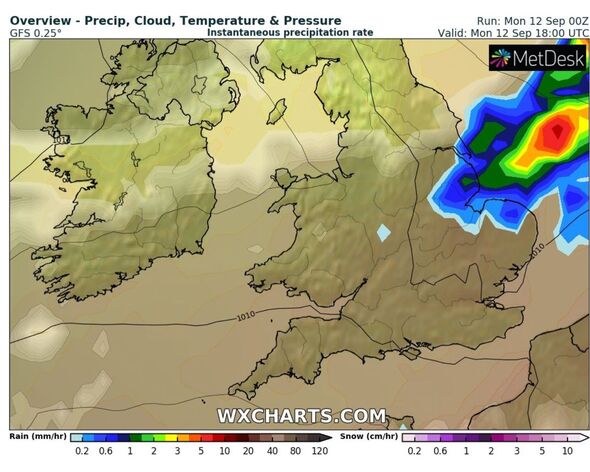 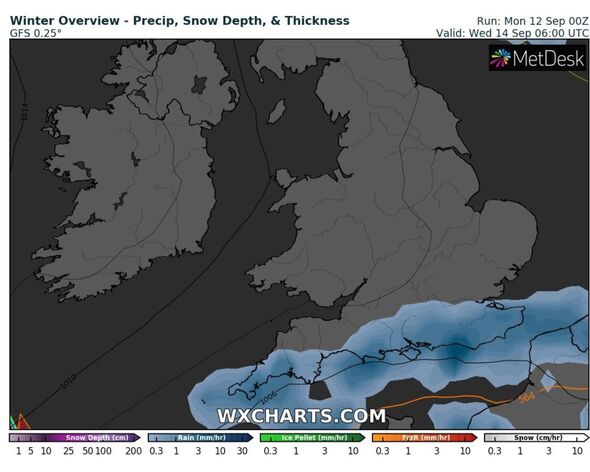 “While the east and northeast could see some cloudier conditions with scattered showers, potentially heavy.

“Winds largely moderate but fresh along the east coast.

“Dry weather continues through the weekend, with a risk of showers remaining in the east, where it will continue to be breezier.

“Higher pressure is likely to become centred across the UK after the weekend, bringing dry weather for many, but with the possibility of rain spreading across the north, perhaps locally heavy at times.

“Temperatures are rather cool but rising through this period, with some chilly nights and overnight fog and mist patches throughout.

“This period is likely to end with high pressure breaking down, making way for more unsettled conditions.”

Looking into October, the heat will dissipate, with the Met Office warning of a north west and south east split – with dry conditions in the south, but wet in the north.