In first-ever Arabian Peninsula visit, Pope Francis said, ‘No violence can be justified in the name of religion.’ 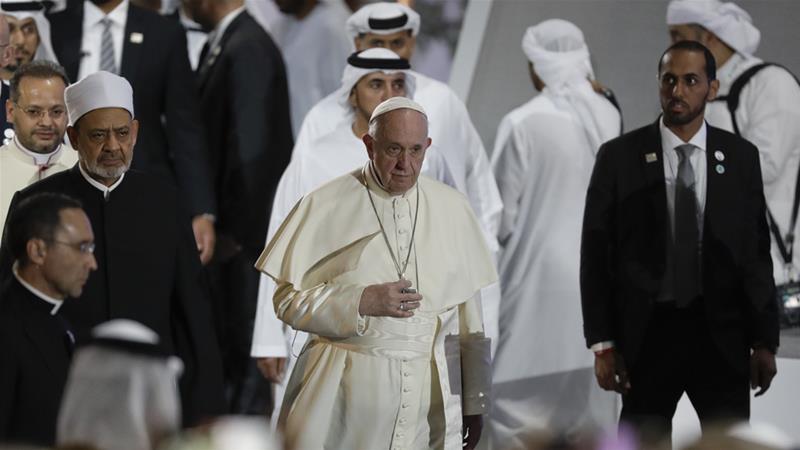 In the first-ever papal visit to the Arabian Peninsula, Pope Francis has said that faith leaders have a duty to reject war as he called for religious freedom in the majority Muslim region.

“War cannot create anything but misery, weapons bring nothing but death,” the pope said on Monday, addressing an inter-religious meeting attended by hundreds of representatives from different faiths.

“I am thinking in particular of Yemen, Syria, Iraq and Libya,” he added.

He said: “Every form of violence must be condemned without hesitation… No violence can be justified in the name of religion.”

Francis, who has made outreach to Muslim communities a cornerstone of his papacy, is on an historic three-day visit to the United Arab Emirates.

The UAE is involved in the wars in Yemen, Syria and Libya.

The United Nations calls Yemen the world’s worst humanitarian crisis. It was triggered by the intervention of Saudi Arabia, the UAE and their allies in a war between the government and Houthi rebels.

The pope said the consequences of the war in Yemen and elsewhere in the Middle East “are before our eyes”.

Francis warned the future of humanity was at stake unless religions come together to resist the “logic of armed power … the arming of borders, the raising of walls”.

“There is no alternative: we will either build the future together or there will not be a future,” said Francis.

He also called for religious equality in the region.

“I look forward to societies where people of different beliefs have the same right of citizenship and where only in the case of violence in any of its forms is that right removed,” he said.

At the end of the interfaith meeting, Francis and Sheikh Ahmed al-Tayeb – the grand imam of Egypt’s Al-Azhar, the highest seat of learning in Sunni Islam – signed a joint statement on “human fraternity” and their hopes for world peace.

They then laid the cornerstones for a new church and mosque to be built side-by-side in the UAE capital, Abu Dhabi.

The document describes itself as being in the name of “all victims of wars, persecution and injustice; and those tortured in any part of the world, without distinction”. It also decried modern “signs of a ‘third world war being fought piecemeal'”.

“We resolutely declare that religions must never incite war, hateful attitudes, hostility and extremism, nor must they incite violence or the shedding of blood.”

It added countries have a duty to establish a concept of “full citizenship”. The UAE relies heavily on foreign labourers who have no path to naturalisation.

Even for a nation known for excess, the Emiratis’ red-carpet welcome was remarkable, especially for a pope who prides himself on simplicity. It featured horse-mounted guards escorting the pontiff’s motorcade through the palace gardens, while a flyover trailed the yellow-and-white smoke of the Vatican flag.

Advocacy group Human Rights Watch (HRW) had urged the pope to use his visit to the UAE to highlight abuses it said are currently being carried out in the Gulf state.

It sent a letter to Francis before his visit calling on him to lead international pressure to hold the UAE’s leadership accountable.

“Despite its assertions about tolerance, the UAE government has demonstrated no real interest in improving its human rights record,” the HRW said.

The pope is scheduled to hold an open-air mass on Tuesday for 135,000 of the Muslim country’s estimated one million Catholic residents, set to be the largest ever public gathering in the Gulf state.