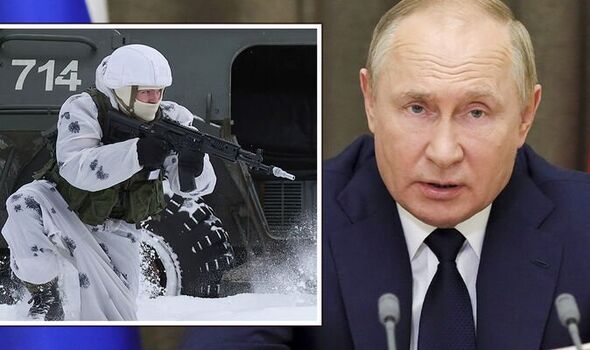 The leaders of two separatist regions in eastern Ukraine have asked Vladimir Putin for help in repelling “aggression” from the Ukrainian army, the Interfax news agency has quoted Kremlin spokesperson Dmitry Peskov as saying, with citizens supposedly fleeing from the area “due to the aggravation of the situation and threats from Kiev”. It comes shortly after the Ukrainian parliament’s approval of a declaration of a state of emergency across the nation and raises fears Moscow could be looking to create a pretext for a full-scale invasion of its neighbour.

While two eastern regions had already been under a state of emergency since 2014, President Volodymyr Zelenskiy, bracing Ukraine for further incursions from Russia, has now applied it to the whole country.

It allows for restrictions on the freedom of movement of conscripted reservists, curbs on the distribution of information and media, and checks on personal documents. It also gives authorities a right to impose a curfew and ban mass gatherings and strikes.

He also told nearly 3 million of its citizens to leave Russia.

The move, which contrasts Mr Zelenskiy’s earlier warnings of “overreaction” and “panic” to the Kremlin’s intimidations, signals a higher level of caution by officials.

Washington’s claims that Mr Putin had assembled almost 100 percent of the forces needed to launch a large-scale attack are thought to have triggered, at least in part, Kiev’s ramped-up approach.

The White House has told Mr Zelenskiy’s government to expect a large-scale offensive in the next 48 hours, with Kharkiv, a north-eastern city 40km from the border with Russia at particular risk according to US intelligence.

Pentagon spokesperson John Kirby said during a briefing on Wednesday Mr Putin’s military buildup on Ukraine’s border is now “at a state of readiness where they could attack at any time”.

He added: “We’ve seen sadly and unfortunately no indication that he’s willing to de-escalate, move those troops back home, and actually get to some sort of serious diplomatic solution, every indication rather that we see is quite the opposite.”

Mr Kirby emphasised an invasion — and hence war — would be the Russian president’s choice, as diplomacy was “still on the table”.

The alleged help Russia is being asked for by pro-Moscow separatists has been shared by the Kremlin’s Mr Peskov, with state media.

According to Mr Peskov, the appeal said: “Kiev continues to build up its military presence on the line of contact, while receiving comprehensive support, including military support, from the United States and other Western states. The Kiev regime is focused on resolving the conflict by force.

“Given the foregoing, the heads of the two republics, in connection with the current situation, as well as in order to prevent civilian casualties and a humanitarian catastrophe, on the basis of Articles 3 and 4 of the treaties on friendship, cooperation and mutual assistance between the Russian Federation and the republics, ask the president of Russia to assist in repelling aggression of the armed forces and formations of Ukraine.”